Comet Storm in a Nearby Star System 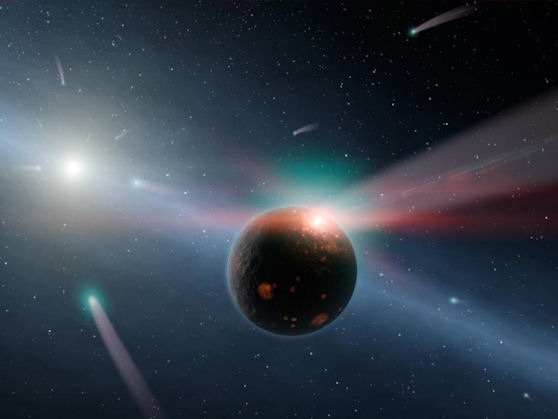 NASA’s Spitzer Space Telescope has detected signs of icy bodies raining down in an alien solar system. The downpour resembles our own solar system several billion years ago during a period known as the “Late Heavy Bombardment,” which may have brought water and other life-forming ingredients to Earth.

During the Late Heavy Bombardment, comets and other frosty objects from the outer solar system pummeled the inner planets. The barrage scarred our Moon and produced large amounts of dust.

Scientists have spotted a band of dust around Eta Corvi that strongly matches the contents of an obliterated giant comet, probably destroyed by a collision with a planet or some other large body. The dust is located close enough to Eta Corvi that Earth-like worlds could exist in the collision zone, suggesting that planets like our own might be involved. The Eta Corvi system is approximately one billion years old, which researchers think is about the right age for such a hailstorm.

A second, more massive ring of colder dust located at the far edge of the Eta Corvi system seems like the proper environment for a reservoir of cometary bodies. This bright ring, discovered in 2005, matches the size of a similar region in our own solar system, known as the Kuiper Belt, where icy and rocky leftovers from planet formation linger. The comets of Eta Corvi and the Almahata Sitta meteorite may have each originated in the Kuiper Belts of their respective star systems.

About 4 billion years ago, not long after our solar system formed, scientists think the Kuiper Belt was disturbed by a migration of Jupiter and Saturn. This jarring shift in the solar system’s gravitational balance scattered the icy bodies in the Kuiper Belt, flinging the vast majority into interstellar space and producing cold dust in the belt. Some Kuiper Belt objects, however, were set on inward paths that crossed the orbits of Earth and other rocky planets.