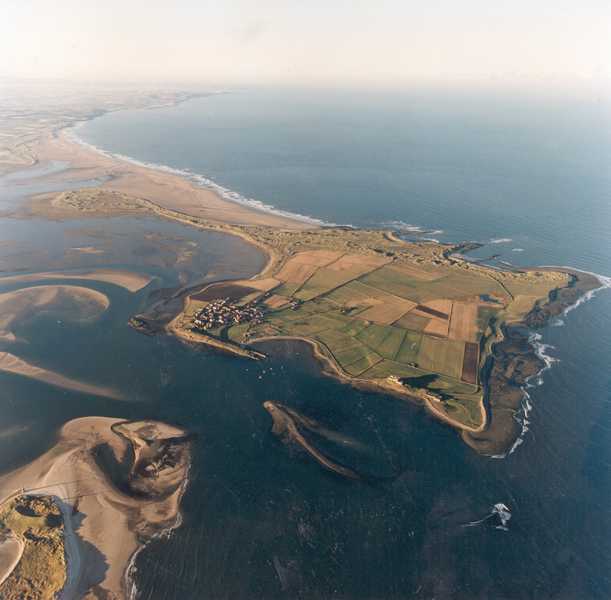 Lindisfarne is a tidal island off the north-east coast of England also known as Holy Island, the name of the civil parish. The Island is within the Northumberland Coast Area of Outstanding Natural Beauty. The name Lindisfarne derives from Farne meaning “retreat” and Lindis, a small tidal river adjacent to the island. Lindisfarne has a population of 162. 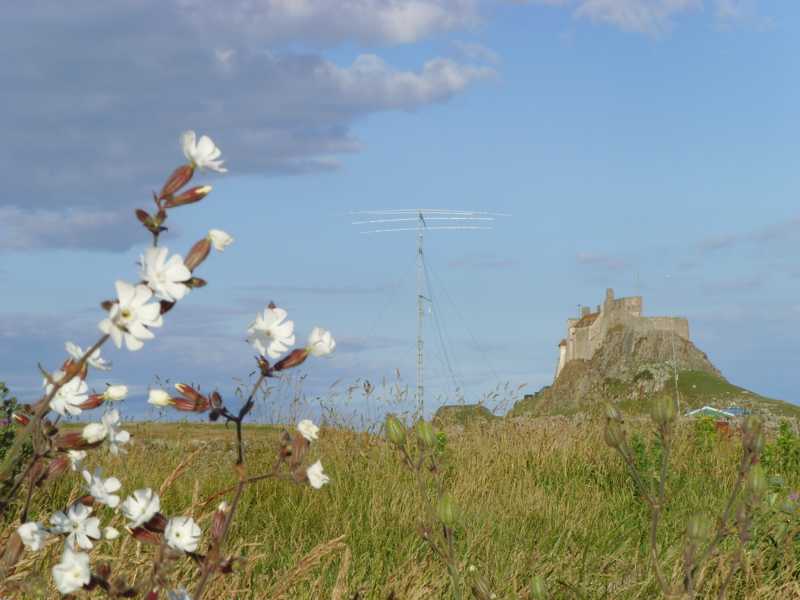 Lindisfarne has a small Castle (Image-Left), based on a Tudor fort, which was refurbished in the Arts and Crafts style by Sir Edwin Lutyens for the editor of Country Life, Edward Hudson. Lutyens also designed the island’s

Celtic-cross war-memorial on the Heugh (Image-Right). The castle, garden and nearby limekilns are in the care of the National Trust and open to visitors.

The monastery on the Island is now a ruin in the care of English Heritage, who also run a museum/visitor centre nearby. The neighbouring parish church is still in use.

The Holy Island of Lindisfarne is well known for mead. In the medieval days when monks inhabited the island, it was thought that if the soul was in God’s keeping, the body must be fortified with Lindisfarne Mead. The monks have long vanished, and the mead’s recipe remains a secret of the family which still produces it. Lindisfarne mead is produced at St Aidan’s Winery, and sold throughout the UK and elsewhere.

As you can see from the aerial view at the top of this page, Sand Dunes cover the northern parts of Lindisfarne and these hold their own specific secrets. Rich findings, indeed, for those who will enjoy the search. This 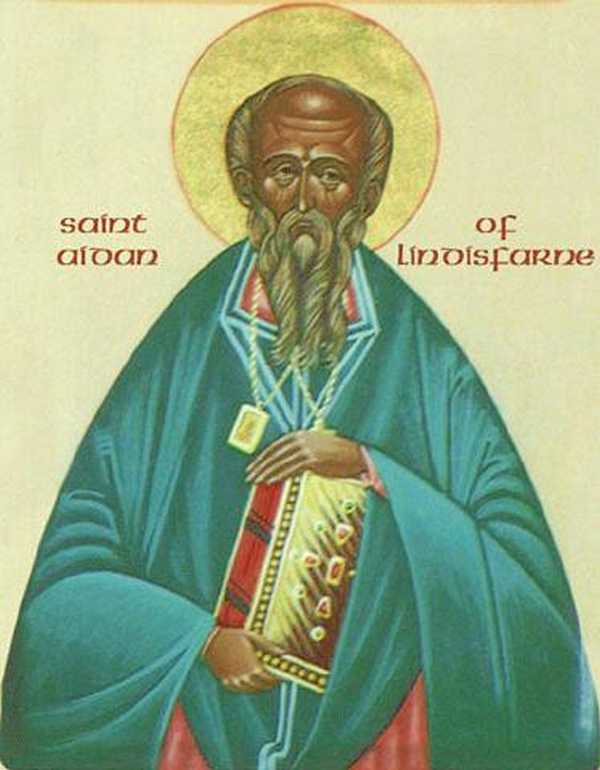 sandy wilderness is home to wealth of unusual and, largely, unexpected wild flowers and insects one in particular is the ‘Lindisfarne Hellaborine’ (Image – Below left). Many plants of Arctic origin occur here, at sea level and it is worth visiting the area in order to see these if nothing else. In Summer you can also find some rare orchids. 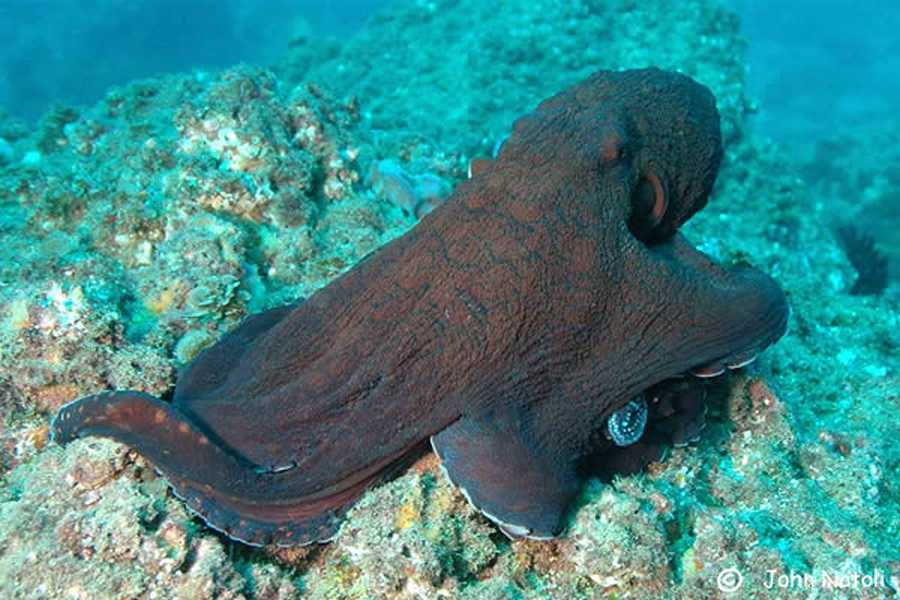 Although the Island was originally designated as a Nature Reserve for its Flora, its bird life continues to draw keen ornithologists throughout the year, for there is always something of interest to be located on the shores. Visiting the Island briefly are hundreds of birds during the migration periods, the species visiting and remaining with us throughout the Winter are probably the most important. Those that come to the shoreline, geese, duck, waders and the occasional rare Northern Gull are largely from the Arctic and occur sometimes in massive numbers.The shore line is now being well preserved, for we may still find the longest animal in Britain, Northern Octopus (Image – Left), Pipe Fish, Fifteen-Spined Stickleback  and a considerable range of unexpected marine Shellfish. Offshore, we have large numbers of North Atlantic Grey Seals and, becoming more resident recently, several hundred Common Seals on the muddy waters between the island and the Mainland.

The Islands represent the culmination of a layer of whinsill rock extending from across the country from Cumbria. For every visible island there are a host of underlying rocky outcrops. They are reckoned to be some of the 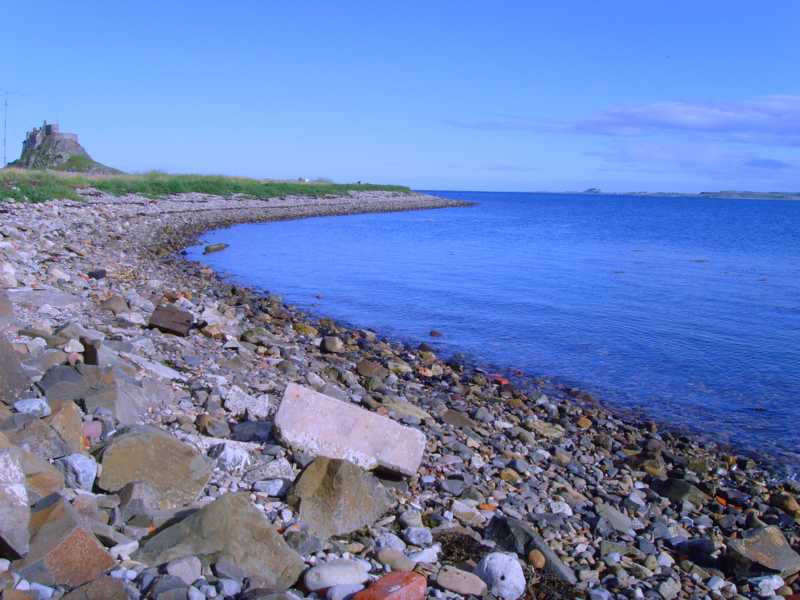 most dangerous waters around the British Isles rendered even more dangerous as they are en route for all shipping navigating the northeast coastline and the tidal currents are both tricky and tremendous.

The number of wrecks in the region range from Spanish boats in centuries past – supplying their Scottish ally, during the period of terrible war between Scotland and England and who, in the confusion of their passage through the islands, were carrion to the English naval squadron lying in wait at Holy Island – right through to modern times. The fast, changing currents racing around the rocky bottom disturb the naturally occurring coal slurry renders visibility almost zero in places. Diving and recovery is consequentially dangerous even for the most experienced and in any event many of the wrecks are soon broken up and dispersed.

Lindisfarne, the largest of the Farne Islands, has a traditional association with the sea with a nautical history which traces back well over 1300 years. In years gone by two lifeboats operated from the island manned by the heroic ancestors of our present day fishermen.
Today’s’ lifeboats are based at Berwick-upon-Tweed and Seahouses. There are many who still feel that there remains a need 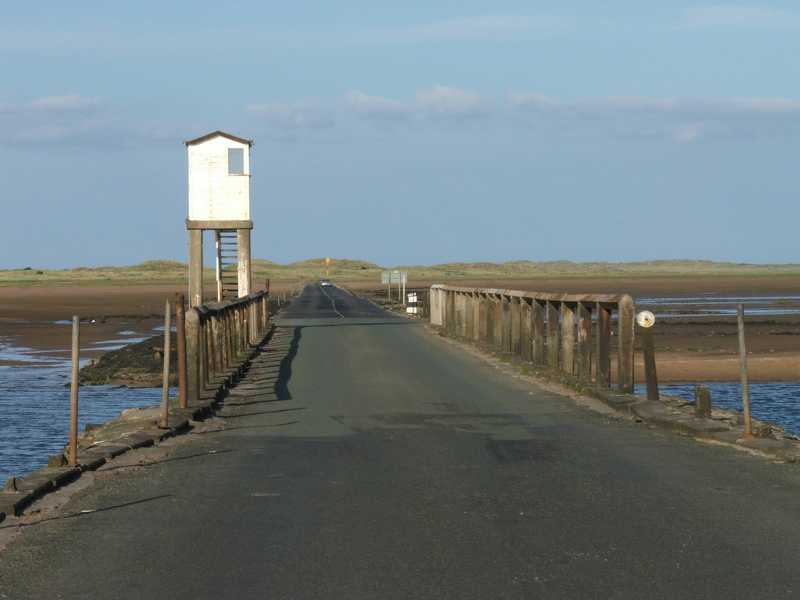 for one based on the island – filling in a potentially missing gap in coastline security and providing a more immediate (and economical) response for the occasional visitors who become stranded on the island’s causeway. The causeway is covered with sea water at every high tide at which point there is no access on or off the Island. The white ‘rescue-box’ does as it says and provides safety when caught out for the pedestrians, 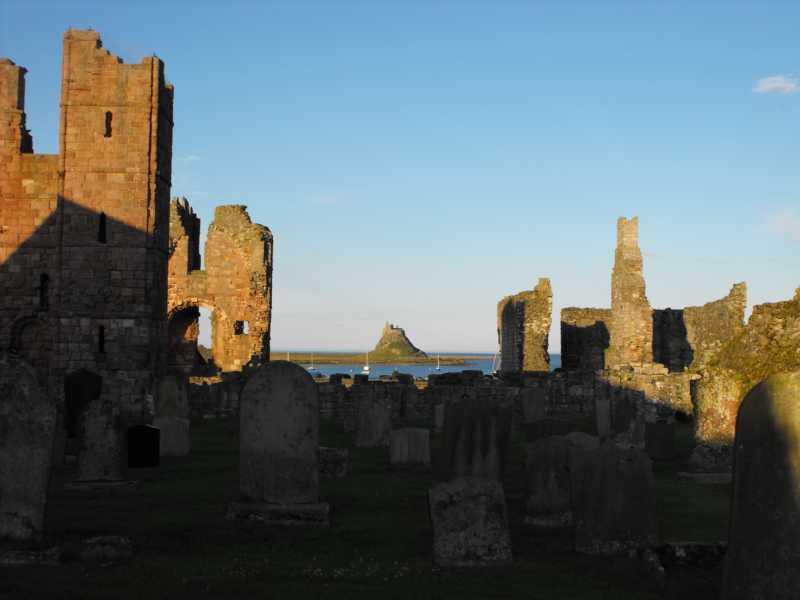 the vehicles not being so lucky! (Photo – Left, courtesy & tnx Gordon Jeffrey).

Our Radio trips to the Holy Island of Lindisfarne are now a regular annual event. I am fortunate to be asked to attend as guest operator with the Wakefield and District Radio Society who make the trip each year from their club location just outside Wakefield city centre, West Yorkshire.

Focusing mainly on this Years event we travelled to Holy Island for a long weekend of radio related activities with approx. 8 members from the Club. This Year we were fortunate with the weather and with hot 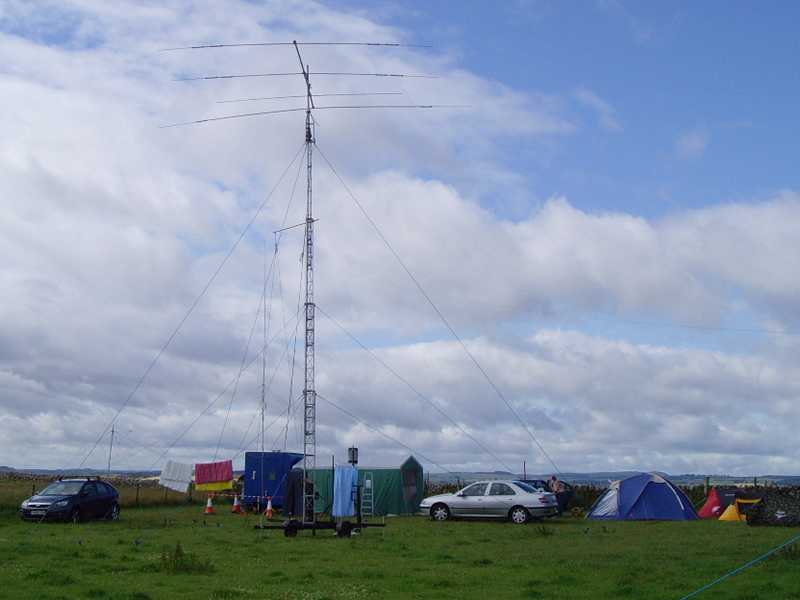 temperatures, setting up was ok. We have been on previous years and the rain has been tremendous and not helping matters having to contend with the long grass and getting very very wet.

Initially some members set up the portable Radio Shack whilst most of the others started to erect the Cushcraft A4S onto the 50ft mobile tower. It’s not a difficult job as having done it on so many other occasions it’s a pretty well rehearsed plan so everything tended to go ok. The next build in the programme was to add the Carolina Windom 80 to the mast. This is stepped away from the main tower using a 3ft long pole and at the main feed point it is around 40 feet above the ground. The vertical radiator 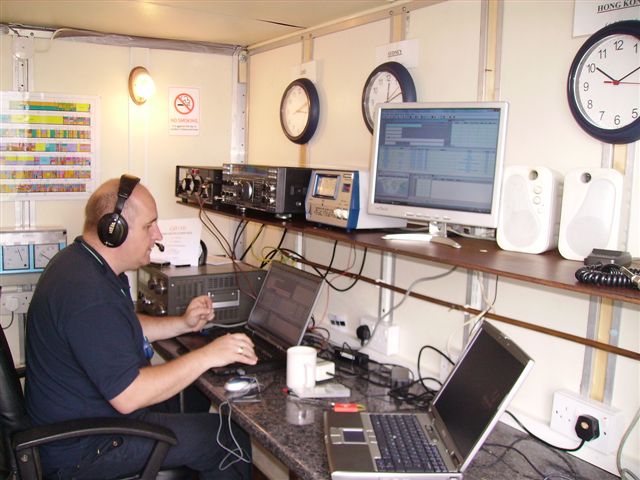 hanging in free space makes the performance of this antenna exceptional and it gives us good results on 80 & 40M. Inside the portable Shack the equipment in use comprises of the Yaesu FT990, Kenwood TL922 Amplifier and a Palstar AT1500CV ATU. Logging is from a laptop computer running Logger32 as its software. Microphones and headsets are courtesy of Heil Sound.

It isn’t appropriate to list the DX worked as we tend to do OK in most directions although favouring the Far East and South/North America tending to perform the best. We have also used the old Coastguards Tower as a location for VHF and Digital Modes in the past and after our third year on Holy island, we have just short of 8500 qso’s in the logs.

On behalf of the W&DRS I would like to add our thanks to Katherine Atkinson of the National Trust, Tim Kirton from Berwick Borough Council, Northumbria County Council, Geoff Porter & Sue Massey Chair of the Parish Council and most of all, the residents of the Island who make this trip possible each Year. Thanks to everyone that supports us at the event each year and we hope for your continued support in Years to come.

If you would like to see more photographs from the trip then please click here or navigate through the Menu above to the Gallery where many more images will be uploaded and if you have any comments good or bad, drop me a line or write into Guestbook which again is accessible via the Menu above. 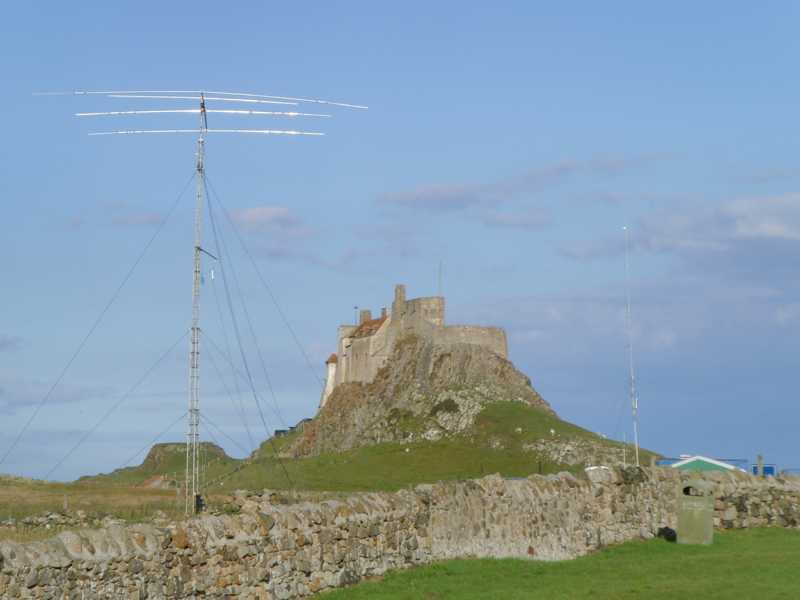 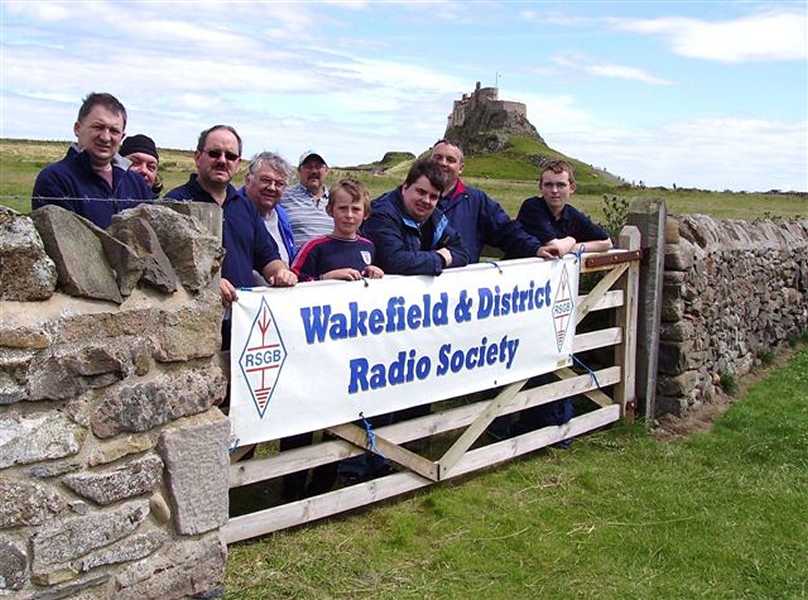 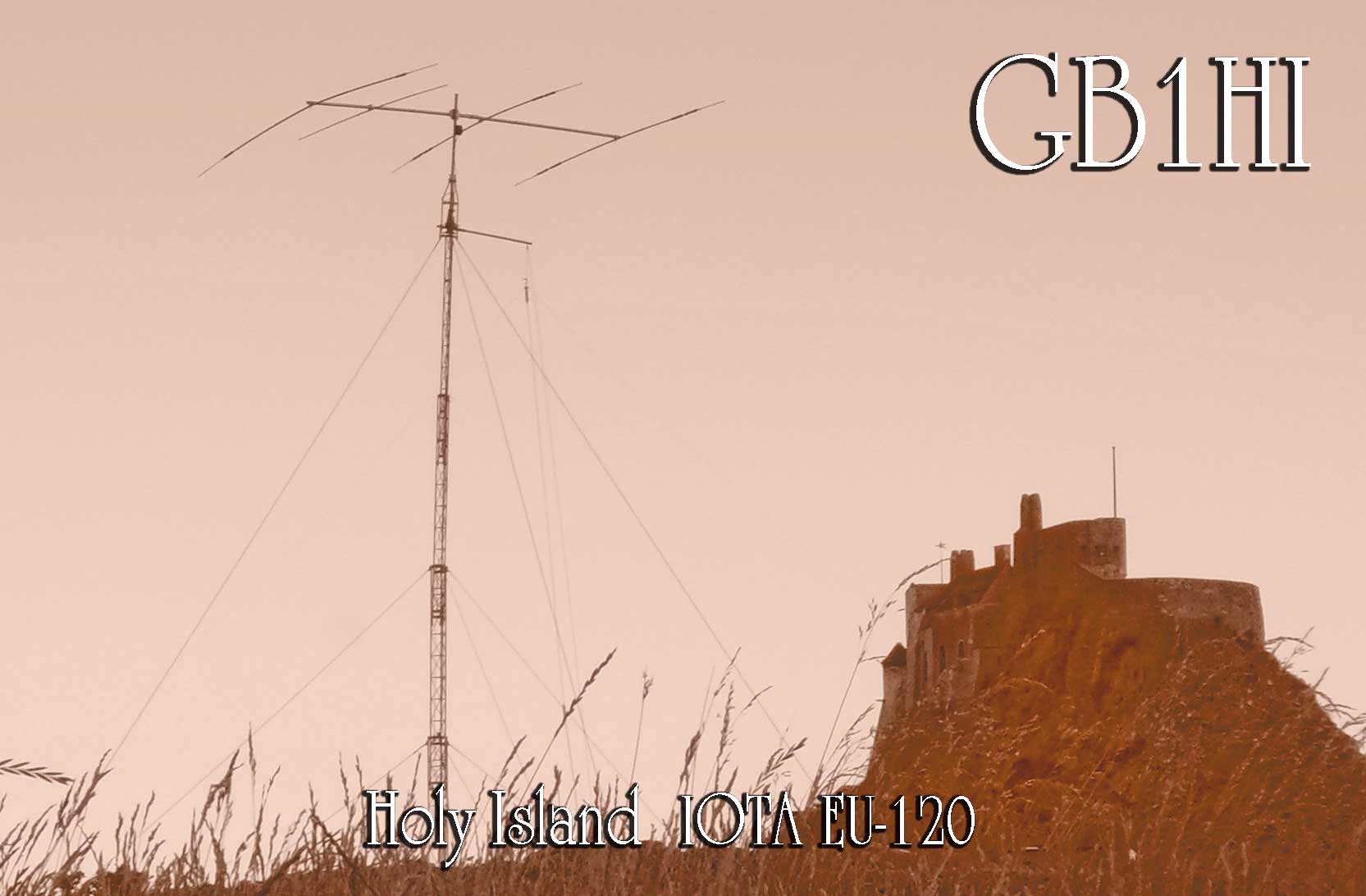