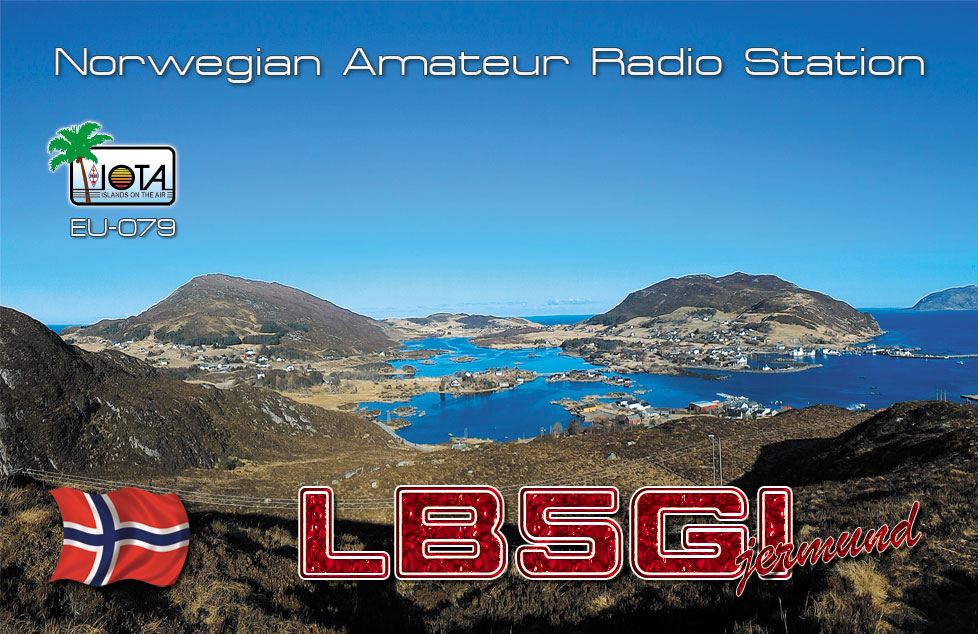 Gjermund, LB5GI has been added to M0OXO QSL Service. Gjermund lives on Sandsøya Island, (IOTA EU-079), just off the coast of Norway.
You can find his log now available on M0OXO OQRS (Link below). QSL Cards are currently being printed and will be available in the usual time frame.
https://www.m0oxo.com/oqrs/logsearch.php?dxcallsign=lb5gi 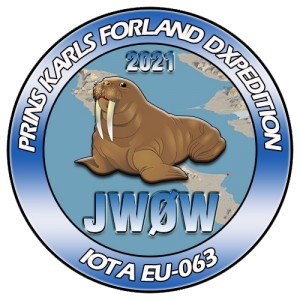 The Team are back home after a successful Dxpedition to Prins Karls Forland Island, Norway, (IOTA EU-063) having made just under 16,000 contacts in the four day trip.
The full log has been uploaded to M0OXO Bespoke OQRS and OQRS is now open. The Log will also be on Clublog for statistic purposes only.
All funds go Directly to the Dxpedition Team so if you wish to make an extra donation at the time of requesting your card they would be very grateful.
Qsl Cards are being designed and further news on this will be posted when available.
Please use the Missing QSO Form in OQRS to report any missing or busted calls. This is for your convenience and is the fastest way to get your enquiries dealt with. Enquiries via Social Media will not be accepted.
Thank you,
https://www.m0oxo.com/oqrs/logsearch.php?dxcallsign=jw0w 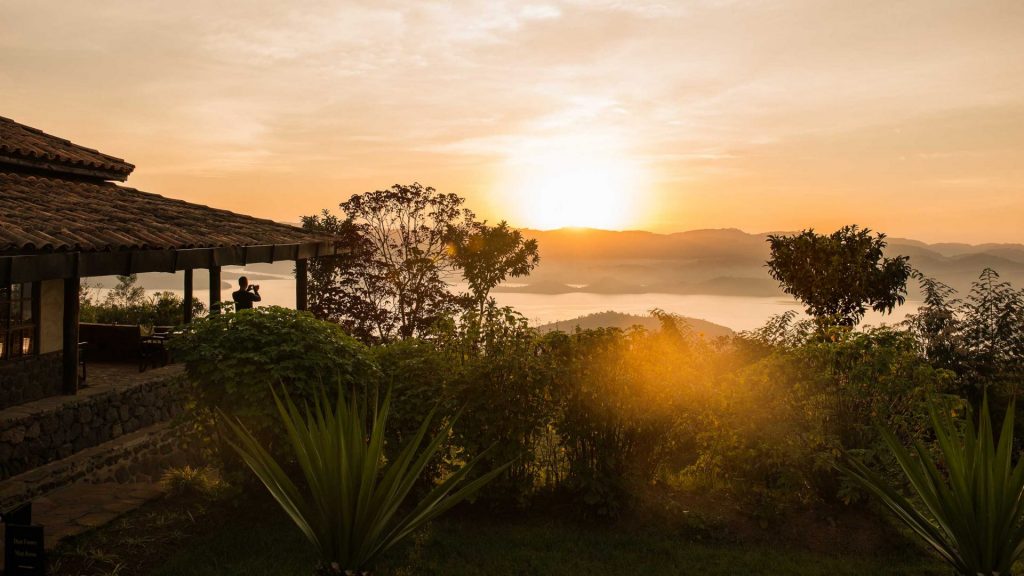 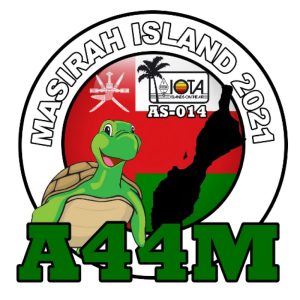 Listen for the guys from the Royal Omani Amateur Radio Society this week operating as A44M from Masirah Island (IOTA AS-014), Sultanate of Oman during the RSGB IOTA Contest.
Outside the Contest the Team will work as A43MI. 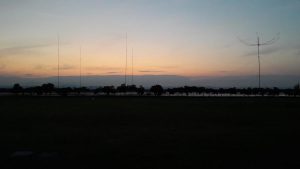 Listen out for the Team Friuli Venezia Giulia this weekend as they activate Barbana Island (IOTA EU-130) Italy as II3Y in the RSGB IOTA Contest.
You can find further information on their website;
www.ii3y.org
https://www.m0oxo.com/oqrs/logsearch.php?dxcallsign=jw0w 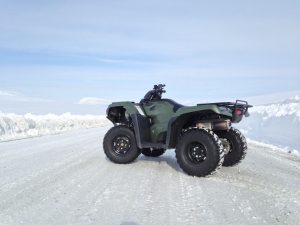 Henry NL0H is preparing to be active for the next few days including during the RSGB IOTA contest from St. Lawrence Island IOTA NA-040.
He has been trying to set up a 10-80 end fed at the top of the mountain, his main obstacle on the Island. Although low to the ground to the South, on the North side it is 500ft above the water. He is not sure how good it will work but he is hopeful it will make a significant improvement. He has been hearing good sigs from VK on 80m, EU on 15m and also VU and Asia on 17m.
He will be qrv 15-20-40-80 during the contest although his focus will be on 20-40 and his only anticipated problem is how long his batteries will work for. 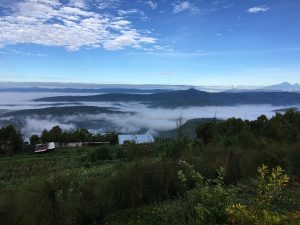 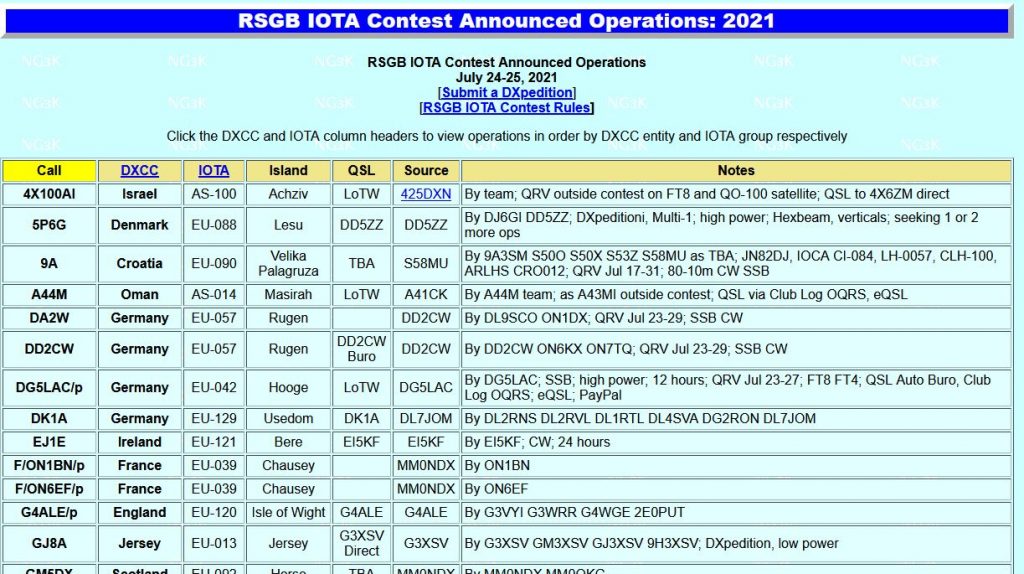 Well just a week away from the RSGB IOTA Contest 2021.
Keep up to date with the latest announced operations on the fabulous website of Bill NG3K, without doubt the best place to find any new ones you may be waiting for.
There is always some surprise activation’s in this Contest so keep your eyes peeled over the next week as the stations start tuning up!
https://www.ng3k.com/Misc/iota2021.html

Imagine an explosion on the farside of the sun so powerful, we could feel it here on Earth. It happened on July 13th. The debris emerged in a circular cloud known as a ‘halo CME. When space weather forecasters first saw this explosion, there was a moment of excitement. It appeared to be heading directly toward Earth. However, data from NASA’s STEREO-A spacecraft indicated otherwise. The CME was heading directly away from us–a farside event.
Now for the interesting part: Although the explosion occurred on the farside, separated from Earth by the massive body of the sun, it still peppered our planet with high-energy particles. The Energetic and Relativistic Nuclei and Electron (ERNE) detector onboard SOHO recorded a surge in radiation not long after the CME appeared.
How did this radiation reach Earth? Rami Vainio, a professor of space physics at the University of Turku (Finland), who works with ERNE data says “it’s not possible to answer that question definitely without a detailed analysis involving multiple spacecraft.” However, she speculates that the lift-off of the CME may have created a global shock wave on the farside of the sun. Particles spilling over the edge might have spiraled toward our planet.
Of particular interest are the green data points (51 to 100 MeV). These are the most energetic protons ERNE can detect. An uptick in green after the CME indicates unusually “hard” radiation—the kind accelerated in the leading ed8ge of a fast-moving CME.
The source of the blast might have been the same sunspot (AR2838) that produced the first X-flare of Solar Cycle 25 on July 3rd. That sunspot is currently transiting the farside of the sun approximately where the CME came from. Within the next week AR2838 is expected to return–and then, maybe, the real fun begins. Stay tuned!

A big Glowing Cloud of MarsDust 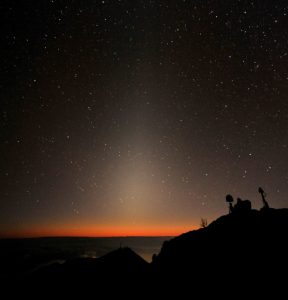 Dust storms on Mars are bigger than we thought; they even spill into space. According to a recent paper in JGR Planets, Mars appears to be leaking dust, filling a huge volume of the inner solar system with gritty debris. You can see it with your naked eye. The bright triangle in this image from the Haleakalā Observatory in Hawaii is marsdust.

It’s called Zodiacal Light, and astronomers have long wondered what causes it. The usually faint triangle is sunlight scattered by dust in the plane of our solar system. The dust, it turns out, comes from Mars.

NASA’s Juno spacecraft flew through the dust cloud en route to Jupiter between 2011 and 2016. Dust grains smashed into Juno at about 10,000 mph, chipping off submillimeter pieces of spacecraft. Juno’s oversized solar arrays turned out to be excellent dust detectors, registering as many as 200 hits per day.

Ironically, the sandblasting allowed researchers to map the cloud for the first time. One theory of Zodiacal Light held that asteroids were responsible. Yet, as Juno flew through the asteroid belt toward Jupiter, impact rates sharply dropped, sometimes to zero. Asteroids were not the answer. Instead, they realized, the dust must be coming from Mars. Orbital elements of the dust grains essentially match that of the Red Planet.

Mars is the dustiest place in the Solar System, with dust storms that envelop the entire planet for months. But how does this dust escape? During storms, dust is sometimes launched to very high altitudes in the Martian atmosphere; researchers call it ‘rocket dust’. However, leaving Mars requires overcoming escape velocity (~5 km/s), and even rocket dust has trouble doing that. Dust grains would have an easier time launching from Phobos and Deimos; however, those small moons don’t produce enough dust to explain the Zodiacal Light.

So, there’s still a mystery here. Mars has the dust, but researchers haven’t yet figured out how Mars delivers it. Lead author John Leif Jørgensen (Technical University of Denmark) and colleagues hope other scientists will help them solve this final piece of the puzzle.