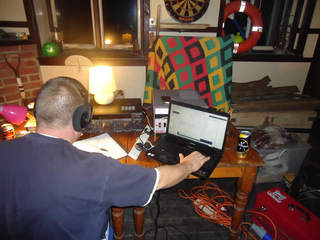 We got on air at 17:23 UTC, first call in the log this time was Christian, 2W0LLL on 40M, it was soon apparent we were a big signal as the radio front end seemed to explode with stations calling us. We had G stations at 10 over, being knocked back by VK and JA coming in at 20 over. The wall of sound was amazing.
Two things had contributed to this, the tide was coming in and we had 1.2 Km of radials under the antenna. We were really moving nicely, 160 was good, with lots of US and EU stations worked on CW, but 40 and 20 were our main stays. We opted to try for 10M on the first morning, bad move. The elderly tuner I have did not like something and blew several caps, it also popped a doorknob Cap off the Linear, this in turn affected our whole higher bands jaunt.. Bah! Two hours later after much head scratching we were up and running, 15, 17 and 20 metres being the mainstay, and the pile ups were fantastic. Some of the comments on the signals blew us away, we knew that we put a decent signal out previously, but it seemed the extra radials had made a huge difference. we had gone up from 40 radials to over 120, some being 40M long for 160.

We ended up on 1197 contacts in the time on the Island, 350 down on last time, but…. This time we have operated for less time through break down, if we had got 10 M running without problems, if we hadn’t struggled with the mast, if, if, if… One thing is certain, no if’s or buts we have had another amazing time on Hilbre, we have learned a huge amount about amateur spirit, good and bad. We have also found that Mart and I are a great team, we work well together, even under pressure. We hope to visit Hilbre again next year, this time to work 10 and 12, maybe even 6m, who knows! One of my favourite films is “Forest Gump”, and to quote a famous line, “Life was like a box of chocolates. You never know what you’re gonna get.” Isn’t that what makes it so much fun?”

Thanks to everyone that assisted or orked us, it means a lot, thankyou!