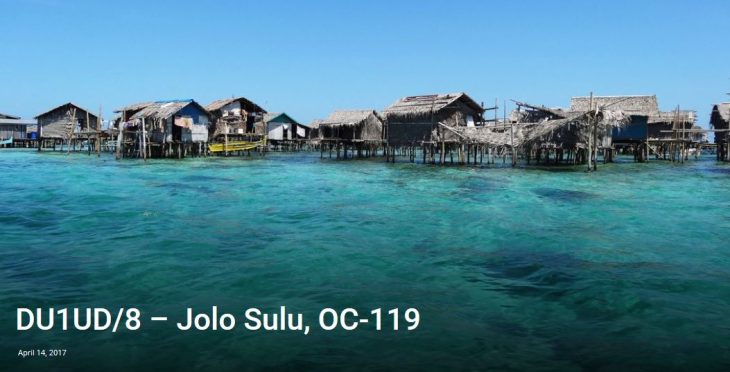 Dindo DU1UD has informed me that he now has the Licences issued allowing him to operate from both Tawi-Tawi and Cagayan De Sulu Island in the Philippines.

The Licences allow him to operate from either Island at any time during 2018 and he will use the Callsign DX8TT for OC-174 and DX8MAP for OC-105, Callsigns specially issued for this DXpedition.

Due to Dindo’s work comitments, the activations usually take place at very short notice, usually only a few days so please keep an eye on this Blog and/or Facebook for further information of when these exciting activations will take place.

He is also considering the use of a Portable Hexbeam by Ant MW0JZE (http://www.g3txq-hexbeam.com/index.php/shop/106/10/g3txq-broadband-hexbeam/ultra-lightweight-d-hexpedition-portable-hexbeam-detail.html) which will give him far more options when decided operating positions on the Islands. 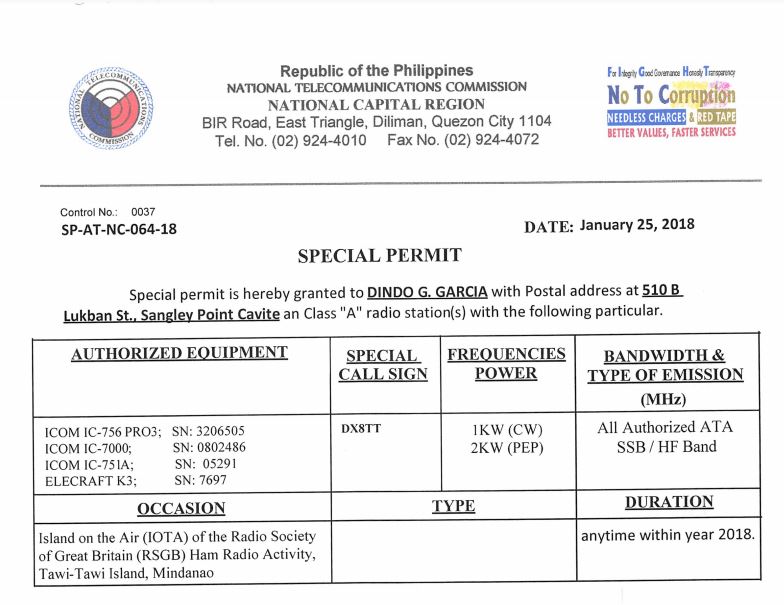 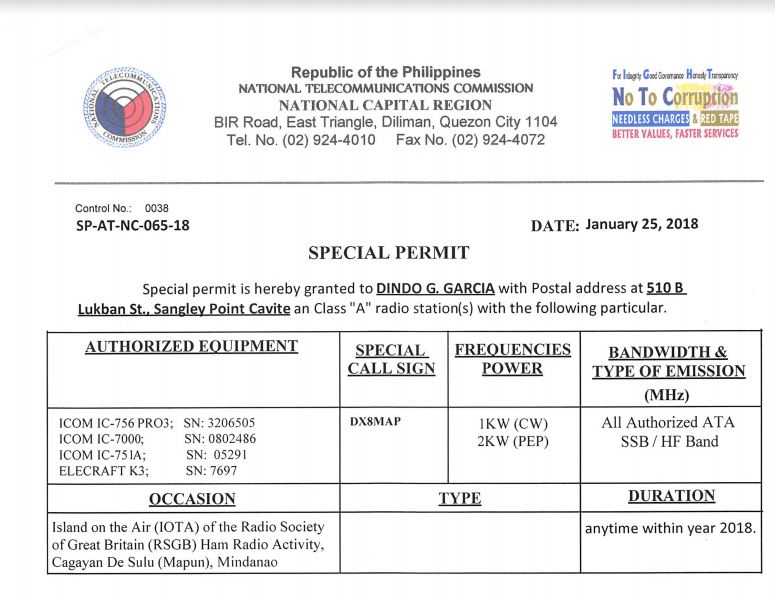 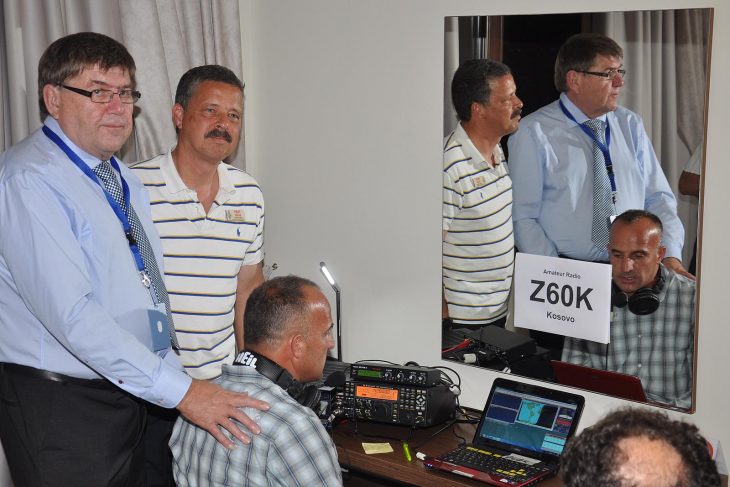 The activation has already started, with Z60A being found on several bands.
Adding to their HQ location is a semi-permanent low-band site. Both sites have beam antennas plus four K3s and SPE 1.3KW amps. Olli, OH0XX has been testing the propagation over the past two days with good — but narrow — U.S openings.

The ARRL Rocky Mountain Division director, Dwayne Allen, WY7FD has informed the team that the LoTW and the other ARRL structures are being put into place to receive this new DXCC country contacts. Already, “Republic of Kosovo” is listed in the DXCC Challenge pages.

ClubLog will be used for this activation, while QSLs will go via OH2BH.

The start date for Kosovo DXCC credit is January 21, 2018. Your old QSL cards will not count.

An updated most wanted list has been published on Clublog. It now shows Saint Brandon as the 27th most wanted entity worldwide (#19 NA, #17 SA, #33 AS, #28 OC, #34 AF, #48 EU). This statistic clearly confirms the relevance of our DXpedition. We knew the demand to be high more than 10 years after 3B7C.

Same as with our previous projects, we know a flawless preparation is the key of the success. We are now working carefully on propagation forecast. Of course our experience of this area is a big advantage, we know some specific tips, possible openings, etc. These forecasts will drive our operations from the first to the very last day, giving priority to the areas with the shortest and most difficult conditions.

We would like to thanks our pilot team: Bjorn ON9CFG, Paul N6PSE, Javi LU5FF, Joe JJ3PRT, and our “chief pilot” Michel F6AGM (ex-FM5CD). Please share your experience and all interesting information with your local pilot during the expedition. We will be in touch with them on a daily basis thanks to our satellite phone.

The pilots will NOT have access to the logs! Questions related to your QSOs should be submitted to our QSL manager through the online form on our website. Do not expect answer until we are back in France.

We would like to take advantage of this communication to wish good luck to our 3Y0Z friends on the way to Bouvet. 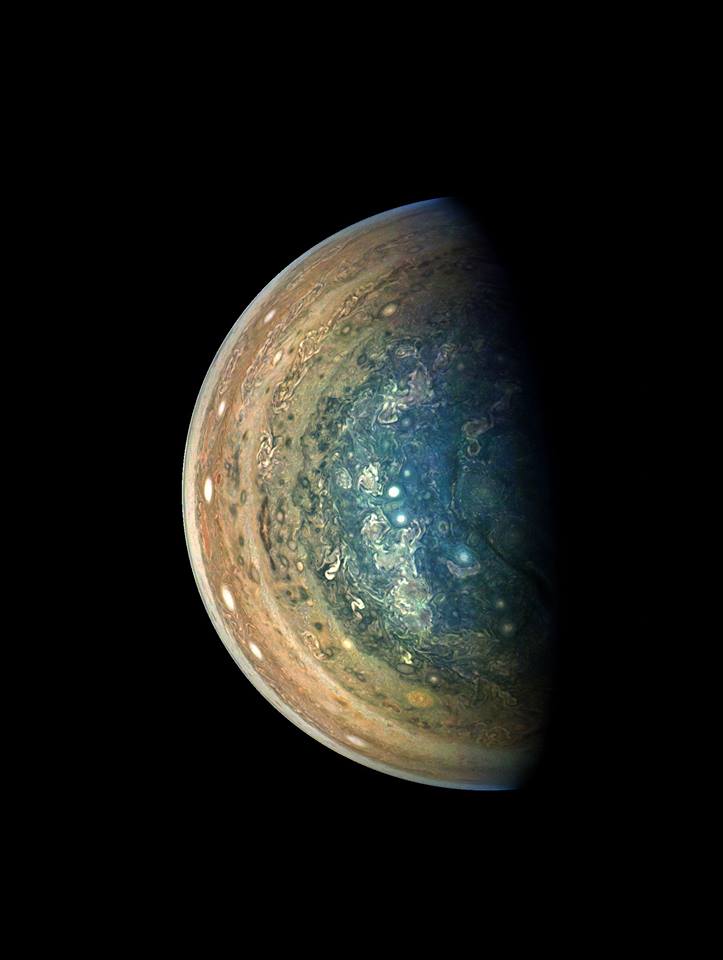 Our solar system’s largest inhabitant – Jupiter – is so colossal that 11 Earths could fit across its clouded disk.

Here’s the planet’s striking south polar region, viewed by our Juno spacecraft as it performed its 10th close flyby on Dec. 16, 2017: 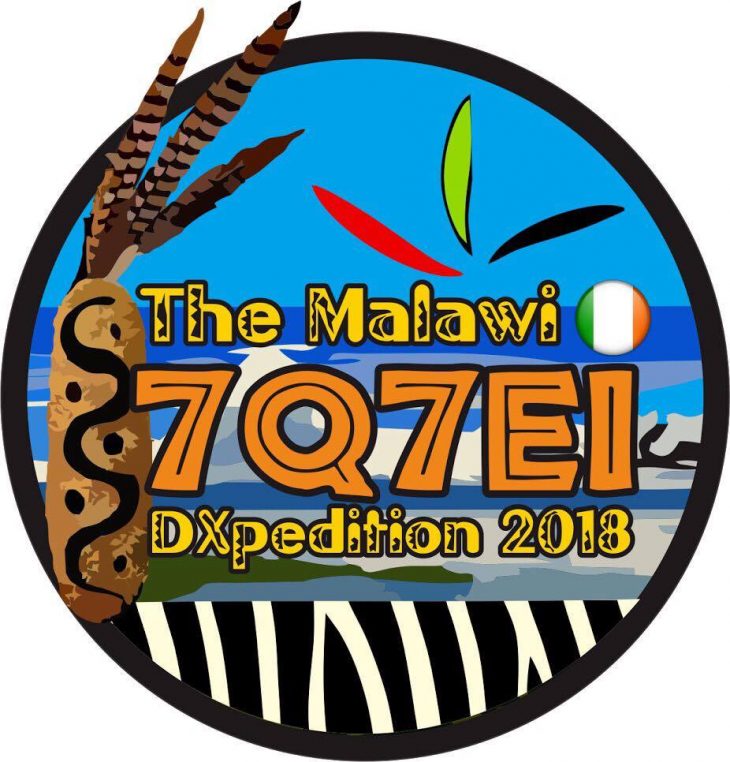 The 7Q7EI Website has been updated with new information regarding their trip in a few weeks time.

Radio Amateurs members of EIDX Group will be active as 7Q7EI from Malawi 21 March – 3 April 2018.
They will operate on 160 – 10m CW, SSB, RTTY including activity in CQ WW WPX SSB Contest. 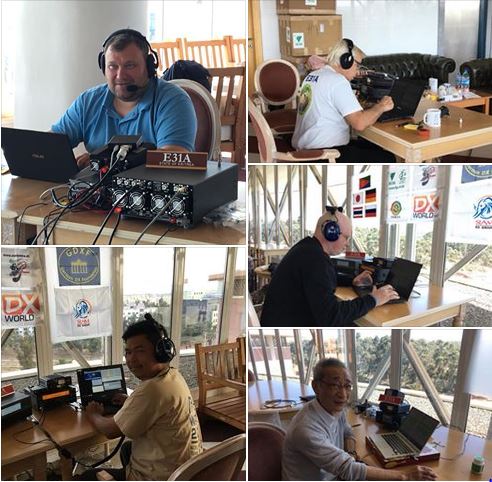 The E31A Team are now qrt from Eritrea.

Zorro will not now activate IOTA AF-038 on this trip but they may be able to do it in one of their future operations.

Zorro did intend to use E39DI as a Callsign from Dahlak Island but this is now cancelled for the time being. 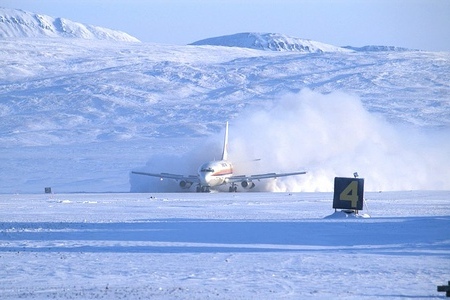 Expect activity on 40 and 20 Meters on SSB, Digital (FT8) and some very slow CW in their spare time through April 1st

The Club is located in the environs of the Eureka Weather Station which is itself located at 79 degrees 59 minutes N, 85 degrees 56 minutes W on Ellesmere Island (IOTA NA-008), Nunavut. VY0ERC is currently operating out of the Polar Environment Atmospheric Research Laboratory (PEARL) Ridge Laboratory (RidgeLab) located approximately 11 km as the crow flies from the weather station (http://www.candac.ca). The RidgeLab is set on top of the hill at 80 degrees 3 minutes N and 86 degrees 25 minutes W at 600 m.a.s.l. The separation is significant as Eureka is in grid square EQ79 and the RidgeLab is in grid square ER60, and as the RidgeLab is above 80 degrees N, it is in ITU zone 75 rather than ITU zone 4. Both are located in CQ zone 2.

We are opening membership in the Club to all interested amateurs.

There are no dues associated with becoming a member, although donations would be gratefully accepted, whether they are monetary or equipment. QSL via M0OXO. 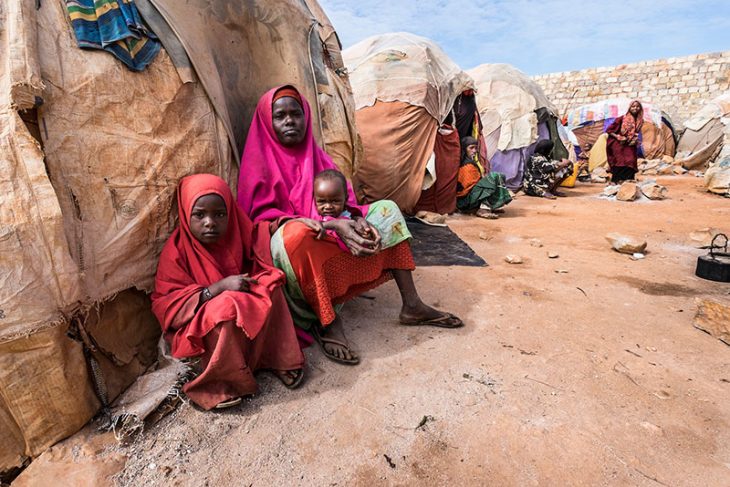 Full log received and all busted call enquiries have been resolved one way or another. The full log is now on M0OXO Logsearch & OQRS. The amended Clublog and LOTW files will be uploaded later so please don’t email me asking for Clublog updates they will be done in due course.

Thanks to Kenneth Opskar & Adrian Ciuperca fior a fanteastic job.

Please also remember all donations for this trip will go to the Doctors Without Borders Charity (DWOB). Ken will uodate his website with the amounts raised in due course so please be generous 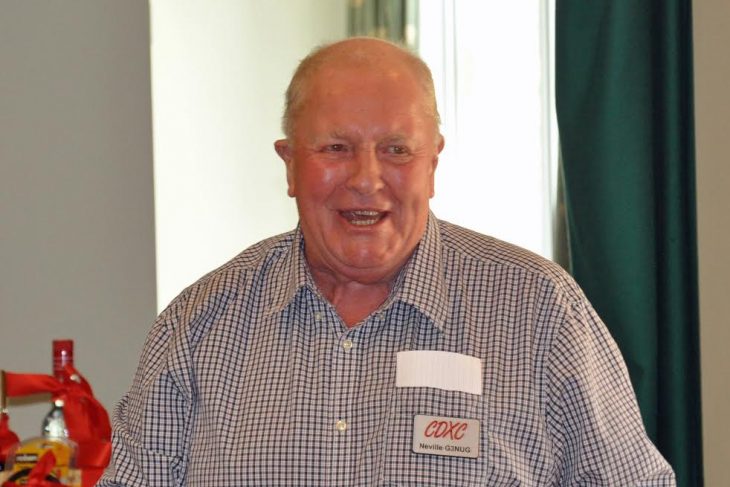 Very sad this morning to hear of the passing of Neville Cheadle G3NUG.

An all round fantastic and inspiring gentleman who will be sadly missed. There will be fond memories Worldwide of Neville from his time in CDXC and indeed the FSDXA Dxpeditions.

Thoughts with Trish his wife and all his family today 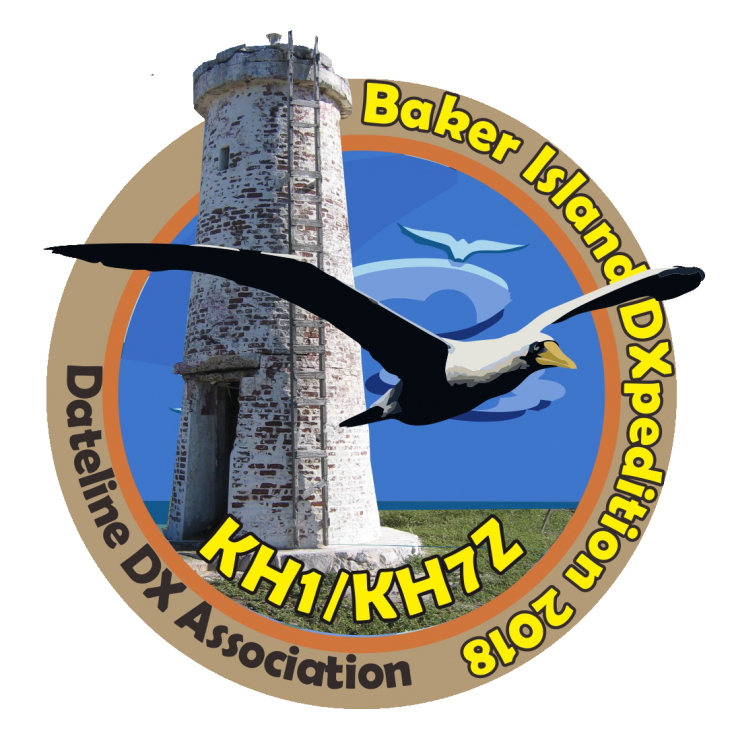 For the KH1/KH7Z operation, Elecraft will supply the highly reliable K3S transceivers and their matching KPA500 amplifiers. These radios are veterans of several highly successful major DXpeditions and will greatly aid our goal of many ATNO contacts.

Our use permit for access to the Baker National Wildlife Refuge restricts the type and height of antennas we can use for KH1/KH7Z. SteppIR Communications Systems is working with team member George Wallner, AA7JV, with antennas that are acceptable to the U.S. Fish and Wildlife Service.

Every operation of this size needs a large number of critical equipment items suitable for island operation. DX Engineering has stepped up to offer those items on an as needed basis. DX Engineering continues to support major DXpeditions, and is a quality supplier of everything needed for the Amateur Radio community.

KH1 is the 4th most wanted entity. Our plans are to bring the KH1 entity to as many operators, and countries as we can. Support from these equipment vendors is appreciated and helps us meet our QSO goals. As with any DXpedition to the really rare ones, this will be another large budget operation. The operator team will contribute over 50% of the expected budget of $400,000. You can help make this DXpedition happen by visiting our website, and contributing today.

Thank you in advance for your support. The Baker Island 2018 Team