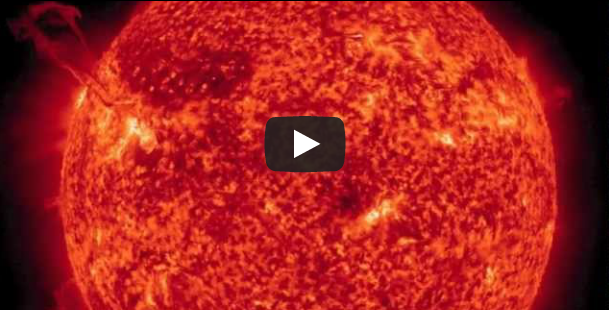 A large filament stretching hundreds of thousands of kilometers erupted on Thursday 31st january, 2012. The eruption lasted about 4 hours and was located in the northeast quadrant of the Sun.

The following SDO video shows a variety of views of the break-up of this structure.

Filaments are anchored to the Sun’s surface in the photosphere, and extend outwards into the Sun’s hot outer atmosphere, called the corona. A filament forms over timescales of about a day, and stable filaments may persist in the corona for several months, looping hundreds of thousands of miles into space. (Click image to see YouTube video).

Some of the plasma was released into space but not all could escape the gravitational pull of the Sun. It’s not surprising that plasma should fall back to the Sun. After all, the Sun’s gravity is powerful.

Filaments are formed in magnetic loops that hold relatively cool, dense gas suspended above the surface of the Sun. When you look down on top of them they appear dark because the gas inside is cool compared to the hot photosphere below. But when we see a filament in profile against the dark sky it looks like a giant glowing loop — these are called prominences and they can be spectacular.