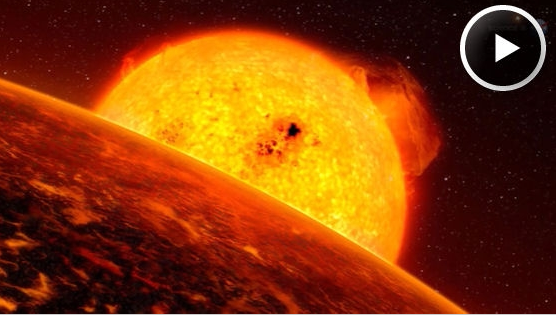 An international team of astronomers has caught a star in the act of devouring one of its planets. BD+48 740, a red giant they observed using the 9.2-meter Hobby-Eberly Telescope at the McDonald Observatory in Texas, appears to have the fumes of a scorched planet in its atmosphere. This is consistent with a rocky world, recently destroyed.

Could the same thing happen to Earth?

Researchers who specialise in stellar evolution have long known that the inner planets are in danger. The trouble starts in the distant future when the sun’s core runs out of hydrogen fuel for nuclear fusion. To keep the fires burning, the sun will begin to fuse hydrogen outside the core, in a layer closer to the stellar surface. This will turn the sun into a red giant, at least 200 times wider than it is today. Mercury, Venus, Earth and possibly even Mars could be engulfed.

The fate of Earth is not a certainty, however. Some researchers believe that Earth’s orbit might spiral outward, keeping the planet at a safe distance from the approaching inferno.  This could happen if solar winds carry away a significant fraction of the sun’s mass in the years leading up to the red giant phase.