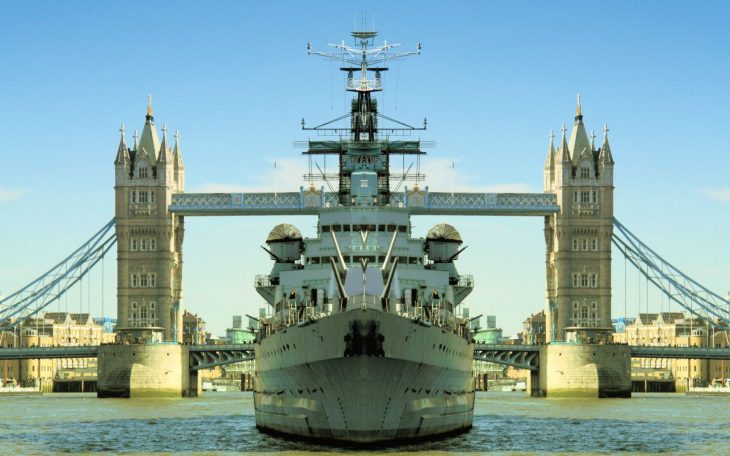 HMS Belfast is a museum ship, originally a Royal Navy light cruiser, permanently moored in London on the River Thames and operated by the Imperial War Museum.

Construction of Belfast, the first Royal Navy ship to be named after the capital city of Northern Ireland and one of ten Town-class cruisers, began in December 1936. She was launched on St Patrick’s Day, 17 March 1938.
She saw a high level of service for her Country from then and in December 1943 played an important role in the Battle of North Cape, assisting in the destruction of the German warship Scharnhorst. In June 1944 Belfast took part in Operation Overlord supporting the Normandy landings. In June 1945 Belfast was redeployed to the Far East to join the British Pacific Fleet, arriving shortly before the end of the Second World War. Belfast saw further combat action in 1950–52 during the Korean War and underwent an extensive modernisation between 1956 and 1959. A number of further overseas commissions followed before Belfast entered reserve in 1

In 1967, efforts were initiated to avert Belfast’s expected scrapping and preserve her as a museum ship. Opened to the public in October 1971, Belfast became a branch of the Imperial War Museum in 1978. A popular tourist attraction, Belfast receives around a quarter of a million visitors per year.

Please listen for GB2RN and give Chris your support!