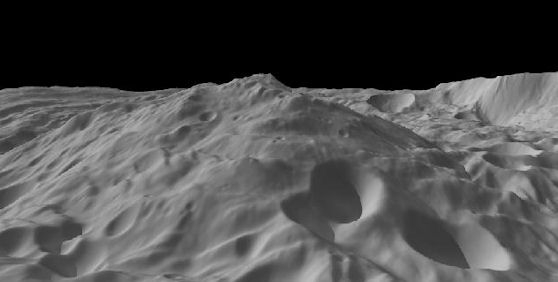 When NASA’s ”Dawn” spacecraft entered orbit around giant asteroid Vesta in July, scientists fully expected the probe to reveal some surprising sights. But no one expected a 13-mile high mountain, two and a half times higher than Mount Everest, to be one of them.

The existence of this towering peak could solve a longstanding mystery: How did so many pieces of Vesta end up right here on our own planet?

For many years, researchers have been collecting Vesta meteorites from “fall sites” around the world. The rocks’ chemical fingerprints leave little doubt that they came from the giant asteroid. Earth has been peppered by so many fragments of Vesta, that people have actually witnessed fireballs caused by the meteoroids tearing through our atmosphere. Recent examples include falls near the African village of Bilanga Yanga in October 1999 and outside Millbillillie, Australia, in October 1960.

“Those meteorites just might be pieces of the basin excavated when Vesta’s giant mountain formed,” says Dawn PI Chris Russell of UCLA.

Russell believes the mountain was created by a ‘big bad impact‘ with a smaller body; material displaced in the smashup rebounded and expanded upward to form a towering peak. The same tremendous collision that created the mountain might have hurled splinters of Vesta towards Earth.

”Some of the meteorites in our museums and labs could be fragments of Vesta formed in the impact — pieces of the same stuff the mountain itself is made of. Vesta formed at the dawn of the solar system, “Billions of years of collisions with other space rocks have given it a densely cratered surface.”

The surface around the mountain, however, is tellingly smooth. Russell believes the impact wiped out the entire history of cratering in the vicinity. By counting craters that have accumulated since then, researchers can estimate the age of the landscape.