The Peak District is an upland area in central and northern England, lying mainly in northern Derbyshire, but also covering parts of Cheshire, Greater Manchester, Staffordshire, and South and West Yorkshire.
Most of the area falls within the Peak District National Park, whose designation in 1951 made it the first national park in the British Isles. An area of great diversity, it is conventionally split into the northern Dark Peak, where most of the moorland is found and whose geology is gritstone, and the southern White Peak, where most of the population lives and where the geology is mainly limestone-based. 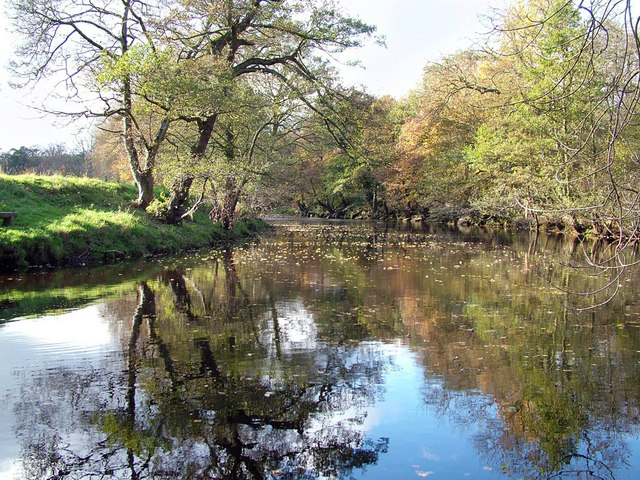 Proximity to the major cities of Manchester and Sheffield and the counties of Yorkshire, Lancashire, Greater Manchester, Cheshire and Staffordshire coupled with easy access by road and rail, have all contributed to its popularity. With an estimated 22 million visitors per year, the Peak District is thought to be the second most-visited national park in the world (after the Mount Fuji National Park in Japan).

The Peak District forms the southern end of the Pennines and much of the area is uplands above 1,000 feet (300 m), with a high point at Crowden Head on Kinder Scout of 2,070 feet (630 m). Despite its name, the landscape lacks sharp peaks, being characterised by rounded hills and gritstone escarpments (the “edges”). The area is surrounded by major conurbations, including Huddersfield, Manchester, Sheffield, Derby and Stoke-on-Trent. 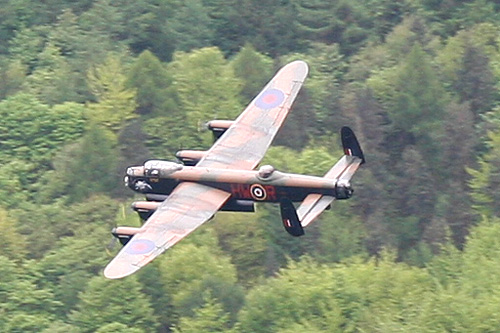 Howden Dam is of solid masonry construction, and 117 ft (36 m) tall, 1080 ft long. and impounds 1.9 million gallons of water, from a catchment area of 5,155 acres (20.86 km2). During the Second World War the reservoir was used by pilots of the 617 Squadron for practising the low-level flights needed for Operation Chastise (commonly known as the “Dam Busters” raids), due to its similarity to the German dams. Occasional flypasts of the Battle of Britain Memorial Flight are staged to commemorate this (As shown in Photo). 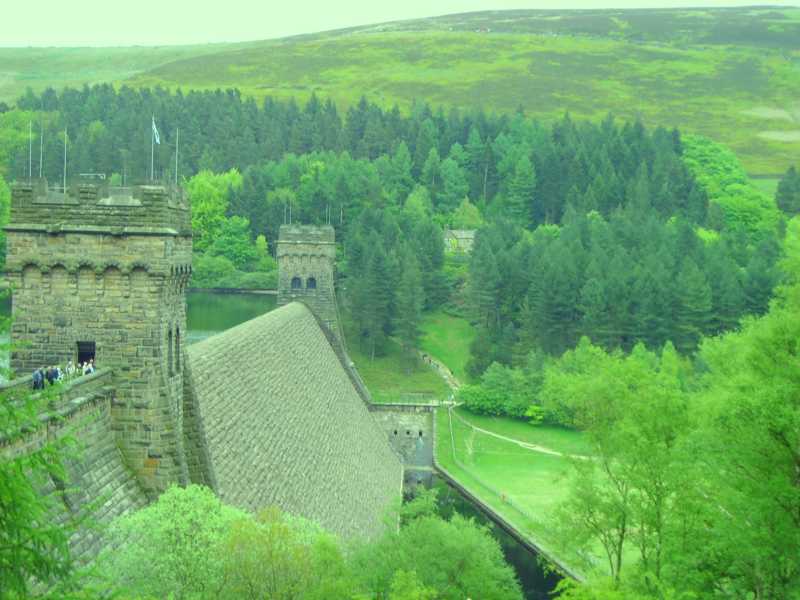 The National Park covers 555 square miles (1,440 km2) of Derbyshire, Staffordshire, Cheshire, Greater Manchester and South and West Yorkshire, including the majority of the area commonly referred to as the Peak. Its northern limits lie along the A62 road between Marsden and Meltham, north west of Oldham, while its southern most point is on the A52 road on the outskirts of Ashbourne in Derbyshire. The Park boundaries were drawn to exclude large built-up areas and industrial sites from the park; in particular, the town of Buxton and the adjacent quarries are located at the end of the Peak Dale corridor, surrounded on three sides by the Park.

The town of Bakewell and numerous villages are, however, included within the boundaries, as is much of the (non-industrial) west of Sheffield. As of 2009, it is the fourth largest National Park in England and Wales. In the UK, the

designation “National Park” means that there are planning restrictions to protect the area from inappropriate development and a Park Authority to look after it, but does not imply that the land is owned by the government, nor that it is uninhabited. Many of the rivers of the region are unpolluted and low enough in sediment levels to provide a home for the native white clawed crayfish. Ancient woodlands like these have much more wildlife value than plantations or other new woodland.  Rocks and scree slopes (formed by the effect of frost on the cliffs above) have developed specialised flora with mosses, lichens and flowers such as herb robert.  If movement stops, eventually screes become flower rich grasslands, or woodland, with a great variety 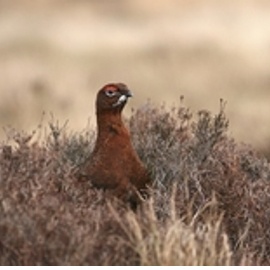 of attractive flowers.  The flowers encourage a range of insects including butterflies and moths. Grasslands have been

maintained by sheep grazing. The reduction in sheep grazing in some areas over the last 100 years has allowed scrub (shrubs such as hawthorn) and long grasses, to grow.The National Trust have cut back shrubs hiding the famous rock features and have re-introduced sheep grazing.
The cuckoo flower is common on the grassland.  This provides food for the caterpillars of the orange-tip butterfly.

Herons often feed in the quiet, northern stretches of the river. trout, dippers, grey wagtails, moorhens and water voles can be seen in, on and by the river. The boggiest areas are marked by the bright green sphagnum moss, together with cottongrass and heathers. Look carefully and you may spot the distinctive (yellow) flowers of the bog asphodel or the more common sundew, an insectivorous plant. The conspicuous white tufts of cottongrass gives rise to the name ‘Featherbed Moss’, used to identify many other areas in the National Park. Drier areas support more woody plants including heather, bilberry and crowberry.

As with much of the British countryside, the spectacular heather moorlands are not naturally like that – they are largely due to the ‘sport’ of red grouse shooting. Red grouse require young shoots of heather upon which to feed plus older plants in which to nest. 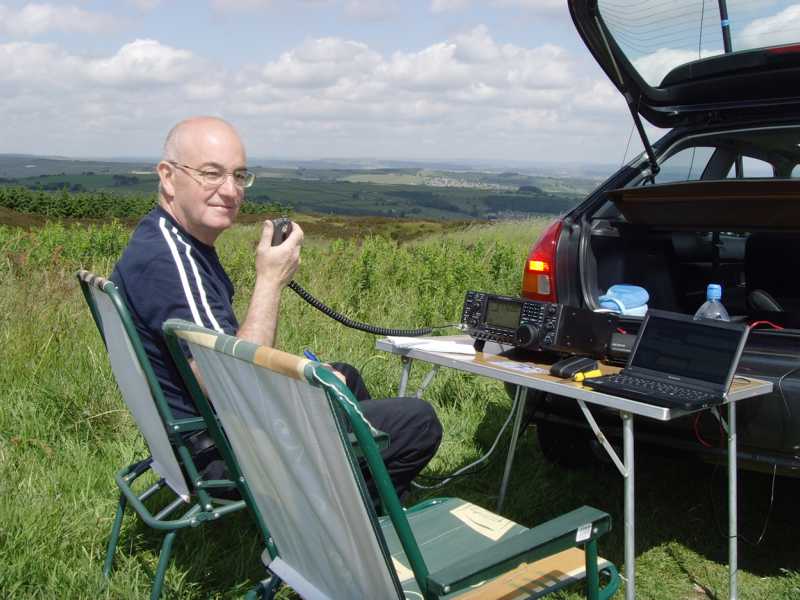 satisfies the needs of the red grouse and is created by controlled burning of the countryside. The red grouse is easily startled and its whirring chuckling flight also startles walkers usually when its not expected!

Thats it for now. I hope you enjoyed your trip into the Peak District National Park, please call again soon! (Photo : Ian M0IAA /p in GFF-014).