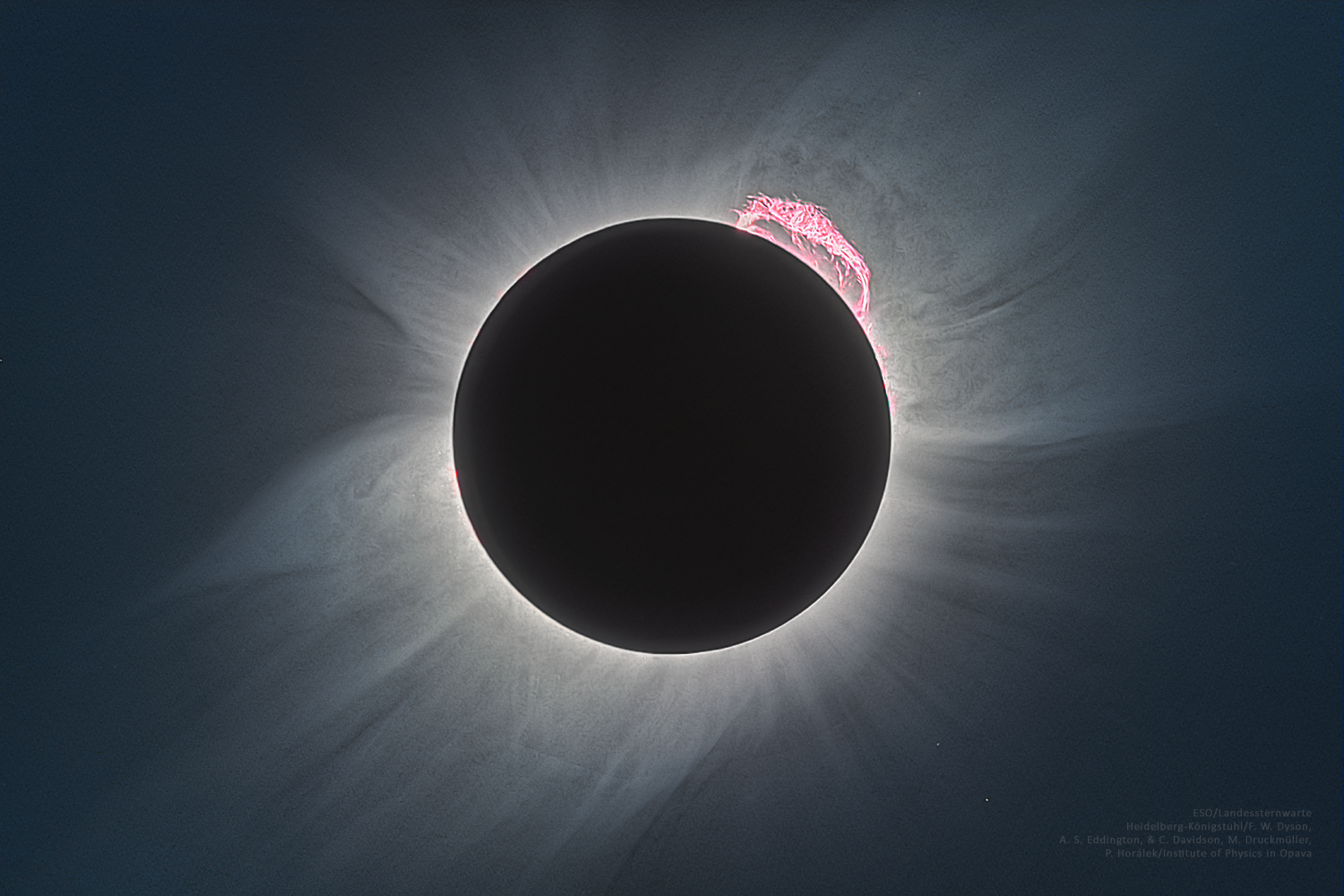 On May 29, 1919, the Moon slid in front of the sun and forever altered our understanding of spacetime. It was “Einstein’s Eclipse.” Using his newly-developed theory of relativity, the young German physicist predicted that the sun’s gravity should bend starlight–an effect which could only be seen during a total eclipse. Some of the greatest astronomers of the age rushed to check his prediction.

More than 100 years later, Petr Horálek (ESO Photo Ambassador, Institute of Physics in Opava) and Miloslav Druckmüller (Brno University of Technology) have just released a stunning restoration of the photo that proved Einstein right. The original picture was taken in May 1919 by astronomers Andrew Crommelin and Charles Rundle Davidson, who traveled from the Greenwich Observatory in London to the path of totality in Sobral, Brazil. They were part of a global expedition headlined by Sir Arthur Eddington. Glass photographic plates from the expedition were typical of early 20th century astrophotography, colorless and a little dull.

“Our restoration shows how the eclipse would have been recorded today–a magnificent sight,” says Horálek. “The astronomers in Brazil must have been amazed when they saw the giant prominence with their unaided eyes.”

Horálek got the idea for this restoration in 2019 when he saw a partially restored image released by the ESO (European Southern Observatory) to celebrate the 100th anniversary of the eclipse. A scan of the original plate was provided by the Heidelberg Digitized Astronomical Plates project … and then the hard work began.

Right: From the report of Sir Arthur Eddington, a half-tone reproduction of one of the negatives taken with the 4-inch lens at Sobral, Brazil. “I started by manually removing scratches and specks of dust from the copied plate,” says Horálek. “There were dozens of them, and the whole process took about 50 hours.”

Finally, he added color. “I created a palette to make the image as natural as possible. The sun’s corona is white because it is sunlight scattered by free electrons. The prominence has that special red color (H-alpha) which hydrogen makes in the sun’s atmosphere. Once these two colors were fixed, the dark-blue hue of the background sky emerged naturally. Voilà!–a modern view of Einstein’s eclipse.” 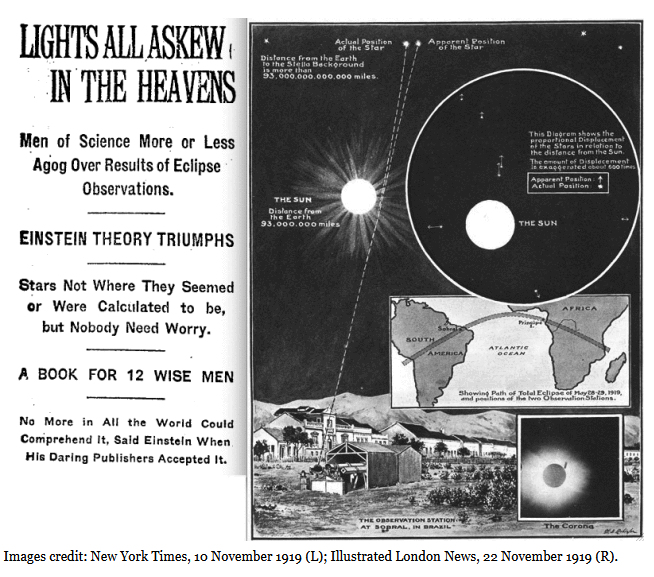 Meanwhile, back in 1919, the eclipse was a sensation. Eddington measured the positions of stars near the sun during the eclipse. Two of them, 65 and 67 Tauri, may be found in the bottom right of the restoration. They were displaced just as Einstein predicted. Spacetime really was a fabric that could be stretched.

The result was splashed across the front pages of most major newspapers, making Einstein and his theory of general relativity world famous. Einstein has been quoted describing his reaction if general relativity had not been confirmed: “Then I would feel sorry for the dear Lord. The theory is correct anyway.”

“2021 is the 100th anniversary of Einstein’s Nobel Prize,” says Horálek. “This photo is our way of paying tribute to his work.”