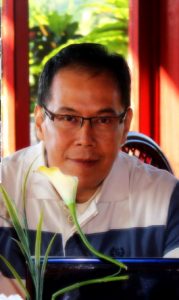 Its with deep sadness we have to report that Halim Dani, YB2TJV (who is also the IARU R3 Disaster Chairman), passed away on 12 December 2020.

Such sad news for someone we (and I personally) are proud to have called a friend. Dani was a great guy, a family man with young children. He will be missed by many

Halim Dani – YB2TJV. Started active on ham radio by joining ORARI in 1982 with callsign YD2DVM then 1984 upgraded to YC2DVM. In 2003 he changed to YC2TJV and in 2007 as an Advanced Licensee to YB2TJV. Preferring DX-ing he enjoyed the activating side of the hobby and worked as a QSL Manager for YE2IPY  (Indonesian Polar Year) and YE2H ( lighthouse IDO-374. He also maintained the APRS system.

Dani was also renowned for producing many of the Logo’s used in out hobby for major Dxpeditions, individual Logo’s and more generally for his design work. He produced most of the Logo’s used by myself over the last 5/6 yesrs including the M0OXO QSL Manager and OQRS Logo’s with which you are all familiar.