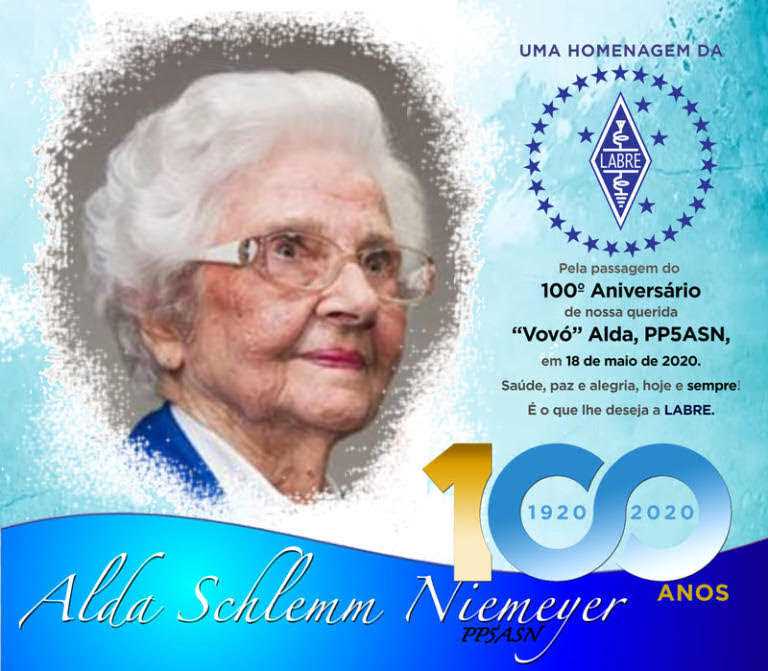 PP5ASN Alda Schlemm Niemeyer, or Vovo Alda, (grandma Alda) as she is affectionately known in the Brasilian radio amateur world, celebrated her 100th birthday on 18 May 2020.

She was born in Joinville on May 18, 1920 and grew up in Curitiba, Brasil.
In  1939, age 19,  Alda, her sister and mother went to  Germany on a  cultural exchange. With the outbreak of  World War II what should have been be a journey of a few months, turned into a stay of  9 years,  They were unable to  return to Brasil as there were no more ships because of  the war.

As  foreigners, they were required  to provide  civilian services. Alda  took a  nursing  course and worked for  the Red Cross. from a dental office, Alda married in Germany and had three children. She survived  the worst bombing of the Second War, in February 1945 in the German  city of  Dresden where she lived.  Despite her house being destroyed in the blaze, and being hit in the head by a piece of brick – which blinded her for three weeks – Alda survived, along with her sister and a small child.
She managed to  return to Brazil in 1947, two years after  the end  of the war.  In 1950 she  separated from  Günter Hermann Schierz and in 1956, became a widow. She married doctor Érico Niemeyer and they  moved to Blumenau in 1956. She had 3 other children with him. She shared  55 years of marriage with Dr. Niemeye until his death  on October 4, 2003, age 77.  She is the grandmother  of 13 grandchildren and 5 great-grandchildren.
She became interested in amateur radio in 1976 (age 56), obtaining a Class C license and the callsign  PY5WGG. In 1978 she up-graded to a Class B license, receiving the callsign PP5ASN. In 1980 ahe obtained a Class A license, keeping the  same callsign,  which she continues to hold today. She has been an active member of the Amateur Radio Club of Blumenau since 1976.Alda participated in the first  women’s radio amateurs expedition held in Brasil to Ilha Comprida-SP,  near the city of Iguape, during the period  October 29 to November 2, 1998 (age 78), with the PS2S call ign in CW and PR2YL in SSB, together with colleagues Elza Cobra de Moraes PY2DHP, Afonsina Teixeira Salema PY2ATL, Adriana Gabardo PY5NT, Therezinha MA Félix Cardoso (Teresa) PT2TF, Alexandra Blumtritt PY2KTT and Arilda Gabardo PY5OA.
At age  84, she  received an  invitation  to travel to  Norway  as a  member the  dx-expedition team that operated in “Morokulien” for 14 days, from July 27 to August 09, 2004. Morokulien is a radio amateur station on the border between Norway and Sweden. The special callsign for the Norwegian side is LG5LG, and the special callsign for the Swedish side is SJ9W. 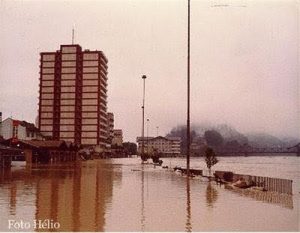 However, Alda considers that her most important work as a radio amateur to be during the years 1983 and 1984, when Blumenau was almost destroyed by two tragic floods. Her courage as a woman and radio amateur can be seen in the pages of “SOS Enchente – A Vale Pede Socorro” (SOS Flood: A Valley Asks for Help), a book published in 1995, which she co-authored.  Currently out of print, the book is a documentary  and photographic account of  radio amateur activities  during the 1983 and 1984 floods.
The flood of 1983 which flooded her own house, encouraged  her commitment to Civil Defense. Grandma Alda (as she is known on the radio) installed her antennas on the building of the then EMBRATEL (Brasilian telecommunications company). From there she was able to mobilize  vital support  for the  city of Blumenau. Vaccines were flown in by the  Air Force, donations of thousands of  liters of drinking water received, medical supplies,  clothing and food obtained;  including many tons of donations from  amateur friends from Germany.  She helped establish communication not only between official bodies, but also arranged for aid to be received from individuals.
Imagine a time before the existence of digital cameras, cell phones and computers; when  fixed phones (land-lines) barely  worked.  Dona Alda (age 63) was however equal to the task and as relentless as the floods in her activities on the radio.
Roberto Landell de Moura (1861-1928) was a Brasilian priest and a scientist. At the end of the 19th century he carried out experiments to transmit the human voice over long distances without the aid of wires or cables.  Father Landell de Moura was a radio broadcasting pioneer.
As a radio amateur, Alda Niemeyer (PP5ASN) has excelled in publicizing the life and work of the Catholic priest and scientist Roberto Landell de Moura, nationally and in Europe. She translated into German, the book –  The Other Side of Telecommunications – The Saga of Father Landell by B. Hamilton Almeida. The book was released in Dortmund, Germany  May 1995.  As a result, radio amateurs in Germany and Austria learned about the life and work  of radio amateurs in Brazil. For her  work  around the work and  life of Padre Moura, Alda received the  commendation of “The Order of Radioamadores Father Roberto Landell de Moura”.

She has written various articles about Ham radio, in Portuguese and German. Participated in many Jamborees on the Air, and since its inception.has been active in the local contest ENCARA. She has  received numerous Special Event QSL cards from across the world, although some were lost during the floods. She lovingly guards the many national and international diplomas and trophies awarded to her through the years.
She took part in the World Radiosport Team Championships 2006  in Florianópolis, SC. (age 86).
She received the Commendation of the Order of Radio Amateurs Padre Landell de Moura, and a Commendation from the Legislative Assembly of Santa Catarina. In November 2012. she received ‘Gentleman of the Civil Defense Medal’ from the Minister of National Integration. In September 2013 she received the title of “Honorary Citizen” from the City Council of Blumenau.
Her enthusiasm is contagious and she always has a ready word of encouragement.  Charismatic and communicative, “Vovo Alda” lives in the hearts of many people in Blumenau, across Brasil and the world.
At age 95 she was  preparing Stollern (German Christmas sweet bread)  for when the family, including grandchildren and great-granchildren gather in her home  to celebrate Christmas. The writer (link below) even included the recipe!
(This article kindly reproduced with kind permission of Heather Holland [YL Beam]).