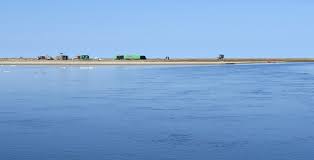 ”Tomorrow, August 8 2019, I am going to Shokalsky Island in the Kara Sea. It is not easy to get to the island!

I will have to take a flight to Novy Urengoy first, then about 500 km to the oilmen-shift workers- settlement at Yamburg. ‘Kartesh’ (which is a research vessel adapted for Arctic scientific research), is picking me up on the August 9. It will go there both to refuel and also to replace the crew.
Having passed a special medical examination I was given the sailor’s medical book so I became a sailor!

Shokalsky Island is a specially protected zone, since it is part of the Gdansk Nature Reserve – the state nature reserve in the Tazovsky District of the Yamalo-Nenets Autonomous District. I had to get special permission to visit the island.

You should bear in mind that there is a limitation on the weight of luggage! Every extra kilogram will costs 500 rubles! It’s not cold there…. but at night, temperature may be 0 degrees centigrade.

I hope I will be able to operate there by​ August 20 2019. MI-8 helicopter should arrive on the island in order to pick up a team of environmentalists and me at around the same time.

Shokalsky Island is located in the Kara Sea, at the entrance to the Gulf of Ob. It belongs to the territory of the Tazovsky district of the Yamalo-Nenets Autonomous Area. Its length’s about 30 km, its width’s up to 20 km, its height’s up to 27 m, the square’s 428 km². The island is separated from the Gydan Peninsula with the Gydan Strait. The surface is a plain covered with tundra vegetation. The island was called Agnes until 1926. The modern name was given to it in honor of M. Shokalsky

I wish everybody good luck and see you in the air!