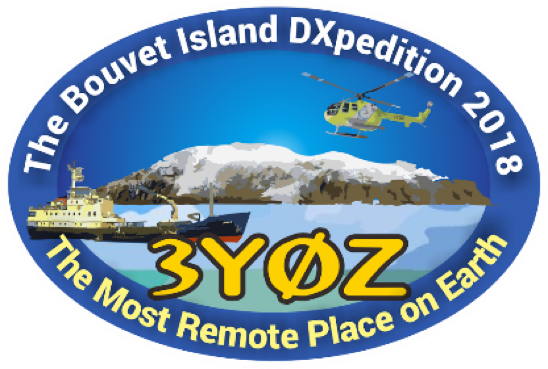 The 3YØZ team members are safely home. We have been home about two weeks now, after 31 days aboard our vessel M/V Betanzos. We have been to Bouvet Island, and as a result, we have a better appreciation for the challenges we face. It is a dark, dismal and dangerous place. Yet, when the sun shines, it is magnificent.

The most difficult thing to reflect upon is the final day offshore, when we saw the island, crystal clear in calm winds, less than a mile away. The conditions were perfect for our first reconnaissance flight and possible landing of
men and camp infrastructure. But, during the violent night before, the Captain had made the decision to abort. In retrospect, his call was clairvoyant. The mechanical, propulsion failure on the ship that occurred would have
brought disaster, if it resulted in some of our men being stranded ashore.

We are sure you are wondering what happens now? Well, we are not the kind of people to give up. The same thing happened when we were trying to activate Peter I in 2005. We came back the following year and with DAP’s
(the vessel owner) help, we got it done.

We are optimistic about a fair settlement and a resulting refund of some of our money paid to DAP for this recent attempt to activate Bouvet. That money, and what we still have in the bank will allow us to begin making plans to try again. We have begun the difficult task of looking for a suitable vessel, and would hope to go back to Bouvet in the next year or two. Obviously, we will keep you informed.

Thank you for the hundreds of favorable and encouraging comments from our financial supporters and sponsors. No one has asked for any of their contributions back, and, in fact, many have offered additional support for the next chapter in this book. We are hopeful that those of you who have invested in this project will see fit to “roll over” your financial support to the next attempt.

So, if we can pull all the moving parts together, we are going to try it again. Hopefully, this time, with a different outcome.