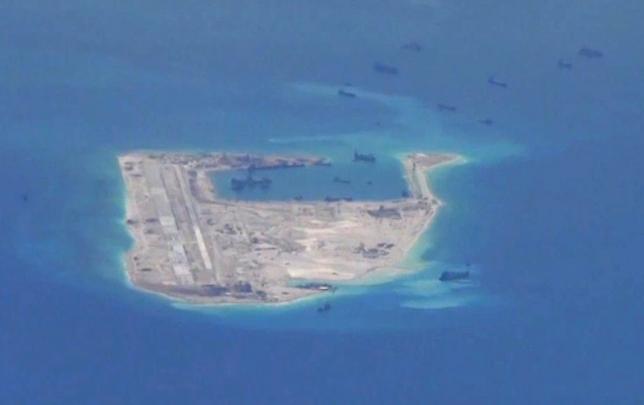 China scrambled fighter jets on Tuesday as a U.S. navy ship sailed close to a disputed reef in the South China Sea, a patrol China denounced as an illegal threat to peace which only went to show its defense installations in the area were necessary. Guided missile destroyer the USS William P. Lawrence traveled within 12 nautical miles (22 km) of Chinese-occupied Fiery Cross Reef, U.S. Defense Department spokesman Bill Urban said.

The so-called freedom of navigation operation was undertaken to “challenge excessive maritime claims” by China, Taiwan, and Vietnam which were seeking to restrict navigation rights in the South China Sea, Urban said. “These excessive maritime claims are inconsistent with international law as reflected in the Law of the Sea Convention in that they purport to restrict the navigation rights that the United States and all states are entitled to exercise,” Urban said in an emailed statement.

China and the United States have traded accusations of militarizing the South China Sea as China undertakes large-scale land reclamation and construction on disputed features while the United States has increased its patrols and exercises. Facilities on Fiery Cross Reef include a 3,000-metre (10,000-foot) runway which the United States worries China will use to press its extensive territorial claims at the expense of weaker rivals.

China’s Defence Ministry said two fighter jets were scrambled and three warships shadowed the U.S. ship, telling it to leave. The U.S. patrol “again proves that China’s construction of defensive facilities on the relevant reefs in the Nansha Islands is completely reasonable and totally necessary”, it said, using China’s name for the Spratly Islands where much of its reclamation work is taking place.