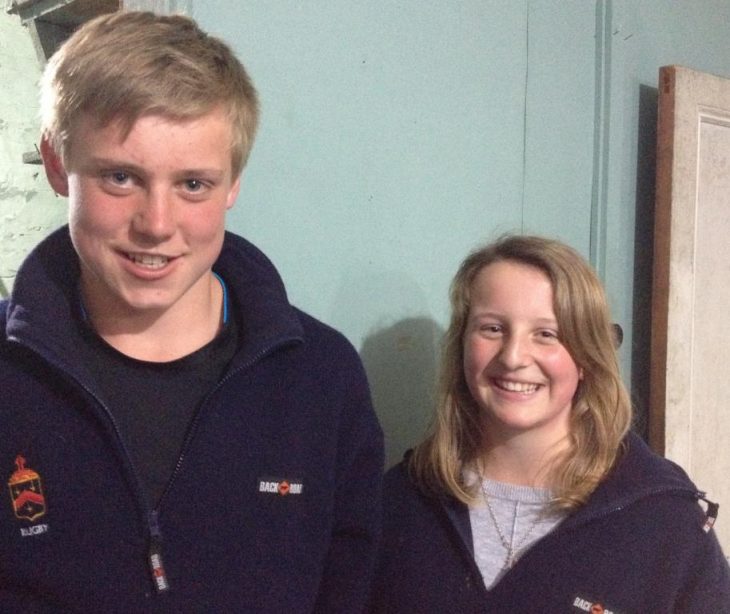 Tonight, around 40 operators and guests crammed into the Shag Valley Station’s historic shearers quarters recreation room, transformed into a three station HF operation shack, to experience the unreal experience of the re-enactment of Frank Bell’s original contact with Cecil Goyder at Mill Hill School in London.

Among the guests were the current land-owners and hosts, Johnny Bell and his family, 5th and 6th generation Bell’s on the station.

As the operating team anxiously watched the Greyline simulator on the computer, initial contact was made on 20m with reception, once a clear frequency was found, excellent. This lead to what was the highlight of the evening –  Ian at Mill Hill School put two students on the microphone and at our end, Frank Bells great-grand children, Henry and Lucy (Photo left) took the  microphone and very quickly got “the lingo” much to the delight of the assembled audience.  Maybe Branch 30 has two  more budding members?

Meanwhile, Ken ZL4NR had tuned up the second rig on 80m while Mike ZL4OL operated and as the Grand-children finished their QSO’s, he quietly announced to the gathering – worked them! The headphone plug was then pulled and the gathering was able to listen to 2SZ working many stations.