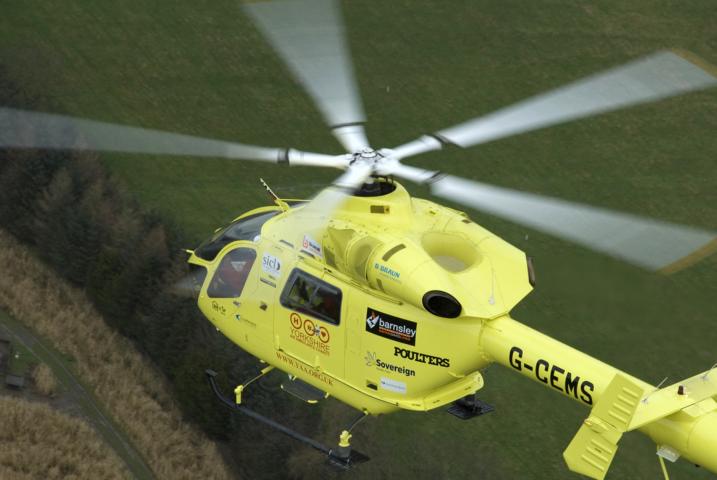 A drummer who had to be cut from a car by firefighters after a head-on collision became the 5,000th patient to be airlifted to hospital by Yorkshire Air Ambulance (YAA).

Chris Parr suffered broken ribs, a fractured breast bone and a fractured knee in the two-car smash at Marsden, near Huddersfield. The 48-year-old, a drummer with Huddersfield band State of Confusion, was airlifted to Leeds General Infirmary. He is now recovering at home and has been visited by YAA paramedics Sammy Willis and John Baxter.

Chris said: ”I could not believe how quick the response was to the accident and all the emergency services were just fantastic. It is amazing to think I am the 5,000th patient they have helped. The air ambulance does such a vital job and I’m so grateful to them.”

YAA was set up 13 years ago and operates two air ambulances from bases in North and West Yorkshire providing a life saving emergency response service to five million people. To keep both helicopters in the air, the charity needs to raise £9,990 per day, equivalent to £3.6 million per year. The only support YAA receives is through the secondment of their paramedics from Yorkshire Ambulance Service NHS Trust.

But demand for the air emergency response service is increasing. Last year YAA attended 933 incidents, and transported 431 patients directly to hospital for treatment, up from 376 patients the previous year.

A YAA spokeswoman said: ”This is an amazing achievement, which couldn’t happen without the wonderful support we receive from Yorkshire people and businesses. So we would like to take this opportunity to say a massive thank you to everyone who helps us to keep saving lives in Yorkshire.”