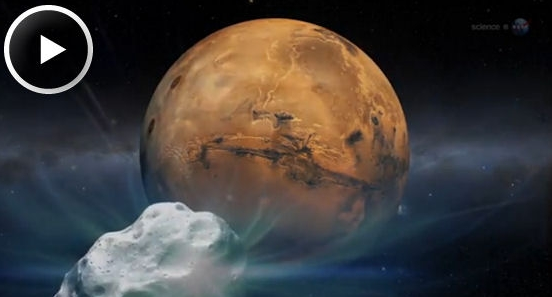 Over the years, the spacefaring nations of Earth have sent dozens of probes and rovers to explore Mars.  Today there are three active satellites circling the red planet while two rovers, Opportunity and Curiosity, wheel across the red sands below.  Mars is dry, barren, and apparently lifeless.

Soon, those assets could find themselves exploring a very different kind of world as there is a small but non-negligible chance that Comet 2013 A1 will strike Mars next year in October of 2014.

The nucleus of the comet is probably 1 to 3 km in diameter, and it is coming in fast, around 56 km/s (125,000 mph). If it does hit Mars, it would deliver as much energy as 35 million megatons of TNT. For comparison, the asteroid strike that ended the dinosaurs on Earth 65 million years ago was about three times as powerful, 100 million megatons. Another point of comparison is the meteor that exploded over Chelyabinsk, Russia, in February of 2013, damaging buildings and knocking people down. The Mars comet is packing 80 million times more energy than that relatively puny asteroid.

The odds favor a flyby, not a collision but either way, this is going to be good..