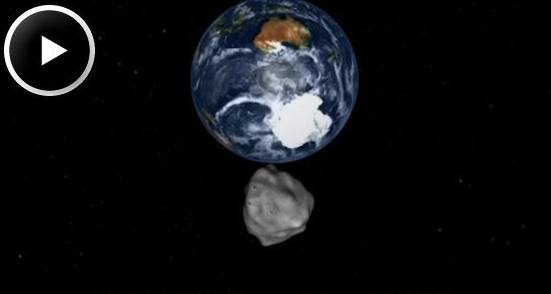 NASA Television will provide commentary  on Friday, Feb. 15, during the close, but safe, flyby of a small near-Earth asteroid named “2012 DA14.”

NASA places a high priority on tracking asteroids and protecting our home planet from them. This flyby will provide a unique opportunity for researchers to study a near-Earth object up close.

The half-hour broadcast from NASA’s Jet Propulsion Laboratory (JPL) in Pasadena, Calif., will incorporate real-time animation to show the location of the asteroid in relation to Earth, along with live or near real-time views of the asteroid from observatories in Australia, weather permitting.

At the time of its closest approach to Earth, the asteroid will be about 17,150 miles (27,600 kilometers) above Earth’s surface. Measuring approximately 50 meters wide, 2012 DA14 is about half the size of a football field. Since regular sky surveys began in the 1990s, astronomers have never seen an object this big come so close to our planet. The asteroid will actually pass closer to Earth than many manmade satellites.

The commentary will be available via NASA TV and streamed live online at http://www.nasa.gov/ntv and http://www.ustream.tv/nasajpl2