Mercury in the skies 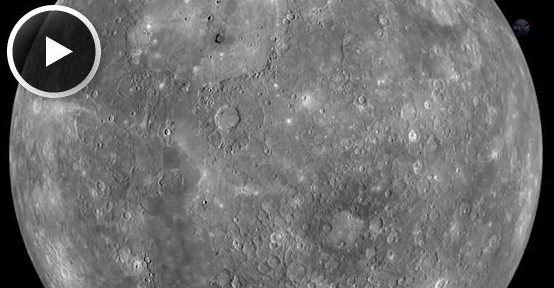 NASA has recently discovered a very strange planet.  Its days are twice as long as its years.  It has a tail like a comet. It is hot enough to melt lead, yet capped by deposits of ice. And to top it all off … it appears to be pink.

The planet is of course Mercury. Mercury is emerging from the glare of the sun for a beautiful two-week apparition during the month of February 2013.  The show begins about a half hour after sunset. Scan the horizon where the sun’s glow is strongest and, if the sky is clear, Mercury should pop out of the twilight, a bright pink pinprick of light.  Mercury itself is not actually pink, but it is often colored so by the rosy hues of the setting sun.

If you’re looking on the evenings of February 8th and 9th, scan the sky around Mercury with binoculars.  A second planet is there, too.  Glowing faintly red, Mars is barely a degree from Mercury.  In binocular optics, Mercury and Mars form a charming little double-planet. Click the image to see the YouTube clip.