Comet of the Century? 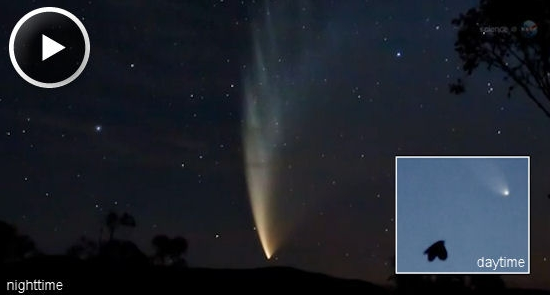 Out near the orbit of Jupiter, a faint speck of light is moving through the black of space.  At first glance it doesn’t look like much, no brighter than a thousand distant stars speckling the velvet sky behind it; indeed, it takes a big telescope make out that it is a comet. But what a comet it could turn out to be…?

Later this year, “Comet ISON” could blossom into a striking naked eye object visible even in broad daylight.

“Comet ISON is a sungrazer,” explains Karl Battams of the Naval Research Lab. “The orbit of the comet will bring it very close to the sun, which we know can be a spectacular thing.”

On the 28th November 2013, this “dirty snowball” will fly through the sun’s atmosphere little more than a million km from the stellar surface. If the comet survives–a big IF–it could emerge glowing as brightly as the Moon, briefly visible near the sun in broad daylight. The comet’s dusty tail stretching into the night sky could create a worldwide sensation.