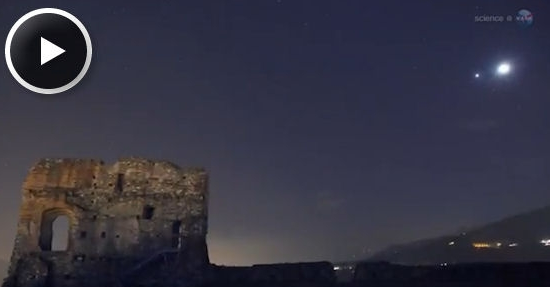 Just when you thought Christmas was over: At the end of the day on Dec. 25th, a pair of holiday lights will pop out of the deepening twilight. Jupiter and the Moon are having a Christmas conjunction.

It’s a beautiful apparition, visible all around the globe. Even city dwellers, who often miss astronomical events because of light pollution, can see the show. Separated by less than 2 degrees, the bright pair will beam right through urban lights.

For anyone who gets a telescope for Christmas, the timing is perfect. Jupiter and the Moon are among the most satisfying targets for backyard optics. A quick sweep of the telescope from Jupiter to the Moon and back again will reveal Jupiter’s storms and cloud belts, the Moon’s mountains and impact craters, and of course the four Galilean satellites circling the giant planet like a miniature solar system.

Jupiter’s trademark Great Red Spot will also be on display–and it is worth a look. Astronomers recently announced that the enormous swirling storm, twice as wide as the planet Earth, is “spinning up.”

But you don’t need a telescope to enjoy the show. Step outside at sunset on Dec. 25th and look east. After all, Christmas isn’t really over until you’ve seen the holiday lights!

A new ScienceCast video previews the Christmas-night conjunction of the Moon and Jupiter. Play it