Why the World didn’t end yesterday 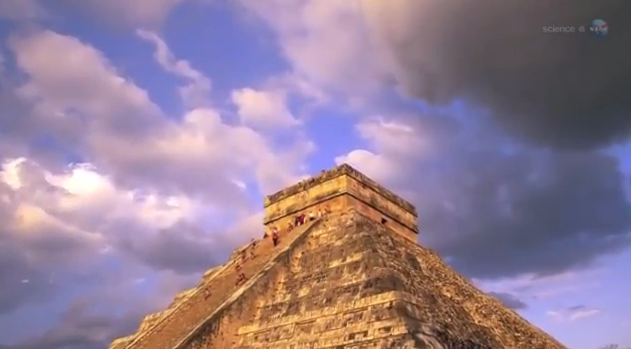 Carlson is a hard-nosed scientist–a radio astronomer who earned his degree studying distant galaxies.  He became interested in the 2012 phenomenon in the early 70s  when he attended a meeting of the American Association for the Advancement of Science and learned about the lost civilization of the Maya.

Where the rain forests of Mesoamerica now stand, a great civilization once flourished. The people of Maya society built vast cities, ornate temples, and towering pyramids. At its peak around 800 A.D., the population numbered more than 2,000 people per square mile in the cities — comparable to modern Los Angeles County.  The Maya mastered astronomy, developed an elaborate written language, and left behind exquisite artifacts.

Most compelling to Carlson was the Maya’s expansive sense of time. “The times Mayas used dwarf any time scales currently used by modern astronomers,” he explains. “According to our science, the Big Bang occurred 13.7 billion years ago.

There are dates and time references in Mayan ruins that stretch back a billion billion times farther than that.”

The Maya Long Count Calendar was designed to keep track of such long intervals. “It is the most complex calendar system ever developed by people anywhere.”

Written using modern typography, the Long Count Calendar resembles the odometer in a car.  It’s a modified base-20 system in which rotating digits represent powers of 20 days. Because the digits rotate, the calendar can “roll over” and repeat itself; this repetition is key to the 2012 phenomenon.

What caused the fall of the Maya? Using NASA data, one archeologist believes he has found the answer.

In the language of Maya scholars, 13 Bak’tuns or 13 times 144,000 days elapsed between the two dates.   This was a significant interval in Maya theology, but, stresses Carlson, not a destructive one.  None of the thousands of ruins, tablets, and standing stones that archeologists have examined foretell an end of the world.

Modern science agrees. NASA experts recently gathered in a Google hangout to review their own findings with the public.

Don Yeomans, head of NASA’s Near-Earth Object Program, stated that no known asteroids or comets are on a collision course with Earth.

Neither is a rogue planet coming to destroy us. “If there were anything out there like a planet headed for Earth,” said NASA astrobiologist David Morrison, “it would already be [one of the] brightest objects in the sky. Everybody on Earth could see it. You don’t need to ask the government, just go out and look.  It’s not there.”

Lika Guhathakurta, head of NASA’s Living with a Star Program, says the sun is not a threat, either. “The sun has been flaring for billions of years–long before the Maya even existed–and it has never once destroyed the world.”)

“Right now the sun is approaching the maximum of its 11-year activity cycle,” she added, “but this is the wimpiest solar cycle of the past 50 years. Reports to the contrary are exaggerated.”

What would an ancient Maya think about all this hoopla?  Carlson believes he knows the answer.

“If we could time warp a Maya to the present day, they would say that Dec. 21, 2012, is a very important date.  Many Maya believed that their gods who created the world 5125 years ago would return.  One of them in particular, an enigmatic deity named Bolon Yokte’ K’uh, would conduct old rites of passage, to set space and time in order, and to regenerate the cosmos.”  The world would be refreshed, not destroyed.

“I have been waiting to experience this day for more than 30 years,” he says.

For him, “experiencing Dec. 21, 2012” means visiting the Maya homeland in the Yucatan, and thinking back to the height of Maya civilization, when ancient humans contemplated expanses of time orders of magnitude beyond modern horizons.

And, of course, appreciating the fact that The World Didn’t End Yesterday.