3 Amateurs back from the ISS… 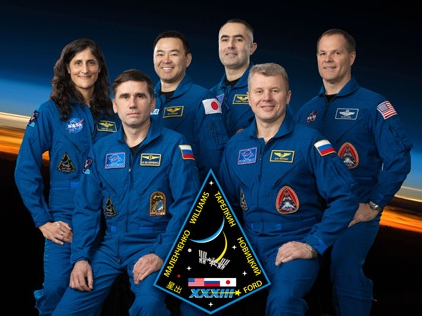 While aboard the ISS, Williams, Malenchenko and Hashide completed 39 contacts with schools via the Amateur Radio on the International Space Station (ARISS) project. According to NASA ISS Ham Radio Project Engineer Kenneth Ransom, N5VHO, this ties with Expedition 15 for the fourth highest number of contacts. In 2011, Expedition 26 — led by Scott Kelly — set the record for having the most ARISS contacts at 73.

Of the 39 school contacts made by Expedition 33, 14 were via telebridge, while 25 took place directly between the school and the ISS via Amateur Radio. A telebridge contact uses an ARISS Amateur Radio ground station and establishes the radio link with the ISS; voice communications between the students and the astronauts are then patched over regular telephone lines. Williams completed 22 contacts with the US, Australia, Germany, Canada, Turkey, Malaysia, Luxembourg, Italy, Spain, Switzerland and India. “In India, we can’t have a direct ISS-to-school contact,” Ransom explained. “We have to use telebridge because you cannot become a licensed radio amateur in that country before the age of 18. That means the school children can’t legally talk on the radio, so we use a telebridge station so they can participate in the contact.”

Malenchenko made two contacts, one with the Ukraine and another with Russia, while Hashide completed 15, including four with his native Japan, as well as with the US, Germany, Australia, Poland and Italy.

“Though the Expedition 32/33 crew’s time was short on the ISS, they made the most of it for ARISS,” Ransom told the ARRL. “Sunita added 22 to her previous total of 33 events, which puts her on top for the most career schools talked to from orbit. Aki also made a great run supporting 15 events, which is an ideal number for a single crew member. We always see good numbers and great events when Sunita Williams is on orbit. She is very education-oriented and has a great way with the kids.”