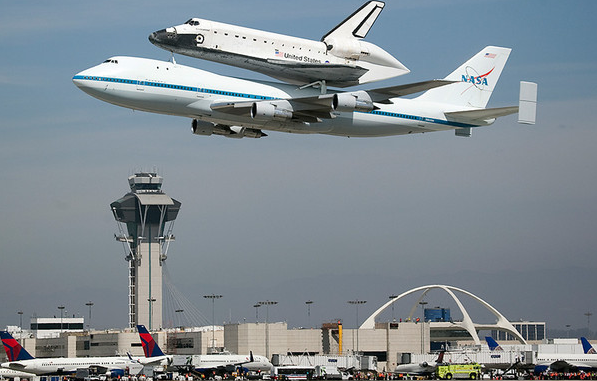 It’s not every day that a space shuttle lands at LAX. Although this was a first for the major Los Angeles airport hub, it was a last for the space shuttle Endeavour, as it completed its tour of California skies and landed, albeit atop a 747, for the last time. During its last flight the iconic shuttle and its chase planes were photographed near several of California’s own icons including the Golden Gate Bridge in San Francisco, the Hollywood Sign, and the skyline of Los Angeles.

The piggybacking shuttle was snapped on approach last week to LAX as it crossed above and beyond a major Los Angeles street.

Now retired, Endeavour was NASA’s fifth and final space shuttle to be built. Construction began on Sept. 28, 1987 and it rolled out of the assembly plant in Palmdale, Calif. in April 1991. Here are some Stats for junkies like me 😉

$1,800,000,000: The cost of space shuttle Endeavour in 1987 dollars when it was built to replace the space shuttle Challenger after the tragic 1986 launch failure that killed seven astronauts. While $1.8 billion may seem like a lot for a NASA shuttle, at the time it was roughly half the cost of earlier shuttles since NASA was able to use some spares to construct Endeavour. 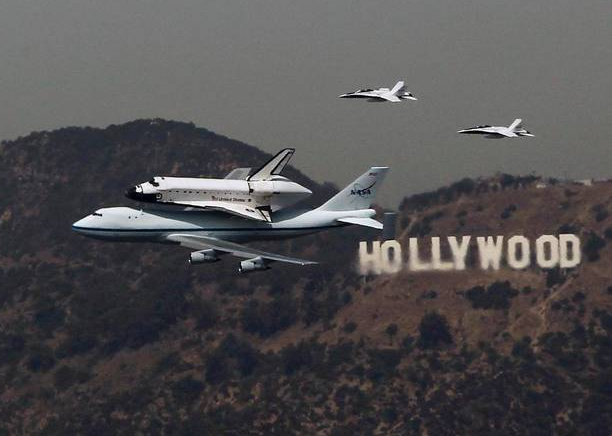 Endeavour will be removed from the SCA using an elaborate set of cranes and wind restraints. It will be placed on a special transportation system and moved into a United Airlines hangar, where it will remain for several weeks while final preparations for its transport and display at the California Science Center are completed.