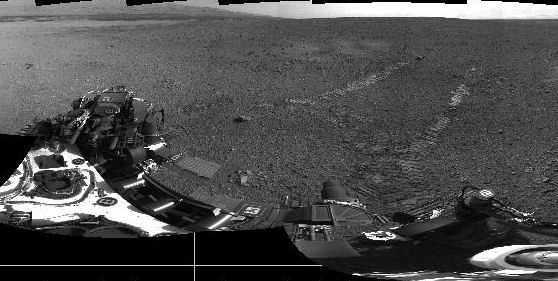 NASA’s Mars rover Curiosity has begun driving from its landing site, which scientists announced today they have named for the late author Ray Bradbury. Making its first movement on the Martian surface, Curiosity’s drive combined forward, turn and reverse segments. This placed the rover roughly 20 feet (6 meters) from the spot where it landed 16 days ago.

NASA has approved the Curiosity science team’s choice to name the landing ground for the influential author, who was born 92 years ago today and died this year. The location where Curiosity touched down is now called Bradbury Landing. This photo shows the tire tracks from Curiosity’s first test drive.The rover made its first move, going forward about 15 feet (4.5 meters), rotating 120 degrees and then reversing about 8 feet (2.5 meters). Curiosity is about 20 feet (6 meters) from its landing site.

Curiosity will spend several more days of working beside Bradbury Landing, performing instrument checks and studying the surroundings, before embarking toward its first driving destination approximately 1,300 feet (400 meters) to the east-southeast.