A Taste of Solar Maximum ? 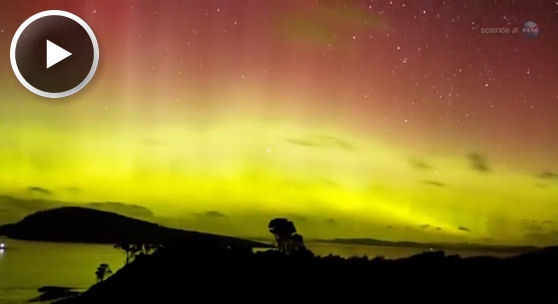 NASA’s twin STEREO probes and the European Space Agency’s Solar and Heliospheric Observatory monitored the CME as it billowed away from the sun.  Using those data, analysts at NOAA and NASA successfully predicted the cloud’s arrival time.  It would take almost two full days for the CME to cross the 93 million mile void between Earth and sun.

Next came the light show.  As the CME’s wake washed across Earth, the polar regions of our planet lit up like a Christmas tree.  Red, green, blue and purple auroras capped both ends of the planet, glowing, dancing, and ultimately spreading to places where auroras are seldom seen.

In Arkansas, for instance, “there was a faint glow off and on for most of the night,” reports Brad Emfinger from a little town called Ozark. “Around 3am there was an outburst of red and purple plainly visible to the naked eye.”

In Pawnee Grasslands, Colorado, photographer Robert Arn saw the Northern Lights for the first time ever: “As soon as I stepped out of the car, the sky looked like it was on fire. Then the Moon, Venus and Jupiter rose together in the east. To see the conjunction and the auroras side-by-side was incredible!”

Meanwhile at the other end of the planet, “auroras were going crazy over the South Pole,” reports Robert Schwarz at the Amundsen-Scott south pole research station “We enjoyed the show under crystal clear skies with an air temperature of minus 105 degrees F.”

From one end of the planet to the other, spanning more than 90 degrees of combined north-south latitude, 183 degrees of temperature, and 360 degrees of longitude, this was truly a global space weather event.

And it was just a taste of things to come.