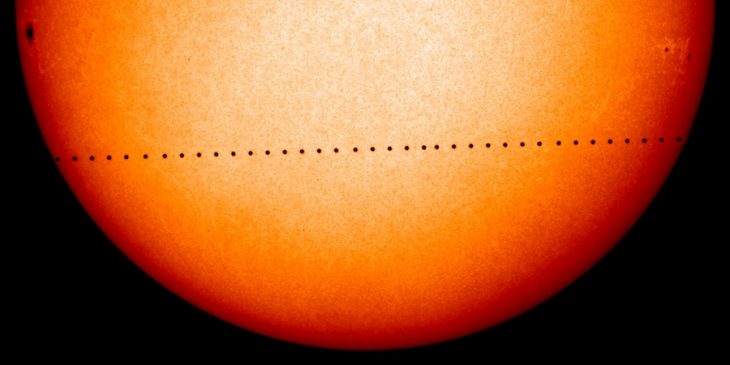 The measurement was achieved by using the solar telescope aboard a NASA satellite, thereby bypassing the blurring caused by Earth’s atmosphere that occurs when observations are made from the ground.

A group of scientists from Hawaii, Brazil, and California has measured the diameter of the Sun with unprecedented accuracy by using a spacecraft to time the transits of the planet Mercury across the face of the Sun in 2003 and 2006.

They measured the Sun’s radius as 432,687 miles (696,342 kilometers) with an uncertainty of only 40 miles (65km). This was achieved by using the solar telescope aboard a NASA satellite, thereby bypassing the blurring caused by Earth’s atmosphere that occurs when observations are made from the ground.

Marcelo Emilio (visiting from Ponta Grossa, Brazil), Jeff Kuhn, and Isabelle Scholl from the University of Hawaii Institute for Astronomy in collaboration with Rock Bush from Stanford University, California, made the measurements of the Sun’s size with the Michelson Doppler Imager (MDI) aboard NASA’s Solar and Heliospheric Observatory (SOHO).

Transits of Mercury occur 12-13 times per century, so observations like this allow us to refine our understanding of the Sun’s inner structure and the connections between the Sun’s output and Earth’s climate.

The team is preparing to observe the transit of Venus across the Sun June 5. They expect these observations will improve the accuracy of their solar size measurement even further.