The Secret Lives of Solar Flares 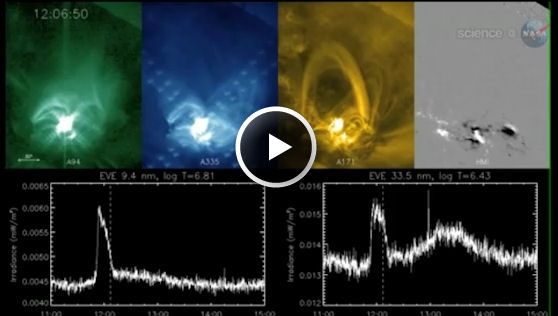 NASA-supported researchers say that solar flares have been keeping a secret. The new finding, reported in the Astrophysical Journal, suggests that explosions on the sun could affect Earth even more than previously thought.

152 years ago, a man (in England) named Richard Carrington discovered solar flares. It happened at 11:18 AM on the cloudless morning of Thursday, September 1st, 1859. Just as usual on every sunny day, the 33-year-old solar astronomer was busy in his private observatory, projecting an image of the sun onto a screen and sketching what he saw. On that particular morning, he traced the outlines of an enormous group of sunspots. Suddenly, before his eyes, two brilliant beads of white light appeared over the sunspots; they were so bright he could barely stand to look at the screen. It would not be the last. Since then, astronomers have recorded thousands of strong flares using instruments ranging from the simplest telescopes in backyard observatories to the most complex spectrometers on advanced spacecraft.

NASA’s Solar Dynamics Observatory (SDO), launched in February 2010, made the finding:  About 1 in 7 flares experience an “aftershock.”  About ninety minutes after the flare dies down, it springs to life again, producing an extra surge of extreme ultraviolet radiation.

“We call it the ‘late phase flare,’” say NASA “The energy in the late phase can exceed the energy of the primary flare by as much as a factor of four.”

What causes the late phase? Solar flares happen when the magnetic fields of sunspots erupt—a process called “magnetic reconnection.”  The late phase is thought to result when some of the sunspot’s magnetic loops re-form. A diagram prepared by team member Rachel Hock of the University of Colorado shows how it works.

The extra energy from the late phase can have a big effect on Earth. Extreme ultraviolet wavelengths are particularly good at heating and ionizing Earth’s upper atmosphere. When our planet’s atmosphere is heated by extreme UV radiation, it puffs up, accelerating the decay of low-orbiting satellites.  Furthermore, the ionizing action of extreme UV can bend radio signals and disrupt the normal operation of GPS.