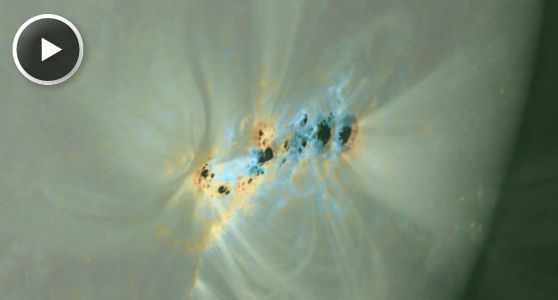 Imagine forecasting a hurricane in Miami weeks before the storm was even a swirl of clouds off the coast of Africa—or predicting a tornado in Kansas from the flutter of a butterfly’s wing in Texas. These are the kind of forecasts meteorologists can only dream about.

Could the dream come true? A new study by Stanford researchers suggests that such forecasts may one day be possible—not on Earth, but on the sun.

“We have learned to detect sunspots before they are visible to the human eye,” says Stathis Ilonidis, a PhD student at Stanford University. “This could lead to significant advances in space weather forecasting.”

Sunspots are the “butterfly’s wings” of solar storms. Visible to the human eye as dark blemishes on the solar disk, sunspots are the starting points of explosive flares and coronal mass ejections (CMEs) that sometimes hit our planet 93 million miles away. Consequences range from Northern Lights to radio blackouts to power outages.

In the 19th August issue of Science, it was announced that they can see some sunspots while they are still submerged.

Submerged sunspots have a detectable effect on the sun’s inner acoustics—namely, sound waves travel faster through a sunspot than through the surrounding plasma. A big sunspot can leapfrog an acoustic wave by 12 to 16 seconds. “By measuring these time differences, we can find the hidden sunspot.”

The report says the technique seems to be most sensitive to sunspots located about 60,000 km beneath the sun’s surface. The team isn’t sure why that is “the magic distance,” but it’s a good distance because it gives them as much as two days advance notice that a spot is about to reach the surface.