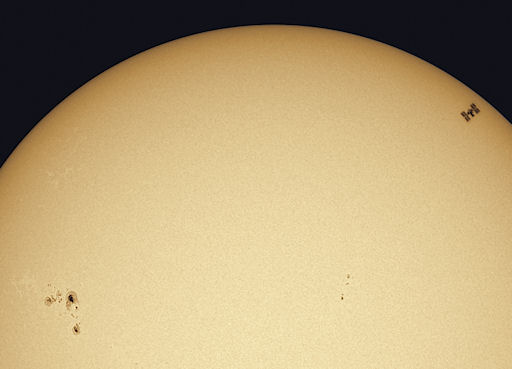 Earlier today, International Space Station (ISS) transited the Sun and it was visible over south Florida.

“The ISS paid a visit to the Winter Star Party in the Florida Keys,” says Allan Friedman, a resident of New York.

“A fine transit of the ISS across the sun was scheduled for 2:39 p.m. not far from this annual gathering of astronomers.

I was scheduled to give a talk on astrophotography ending at 1:30 p.m. As soon as it was done, I made a mad dash to set up and record the pass.

We barely made it in time to catch the ISS silhouetted against the limb of the sun.
Total elapsed time of the transit from our location at Knights Key Resort and Marina – one fifth of a second. A blink of an eye and an 1800 mile drive to see it!”

There were two good passes of the ISS in the UK last night. Sadly though, both the Space Shuttle Discovery and the ISS had ‘merged’ by the time it go to us so no viewing of Discovery as a seperate unit :-(. Nevertheless, it was awesome as always (IMHO)!.