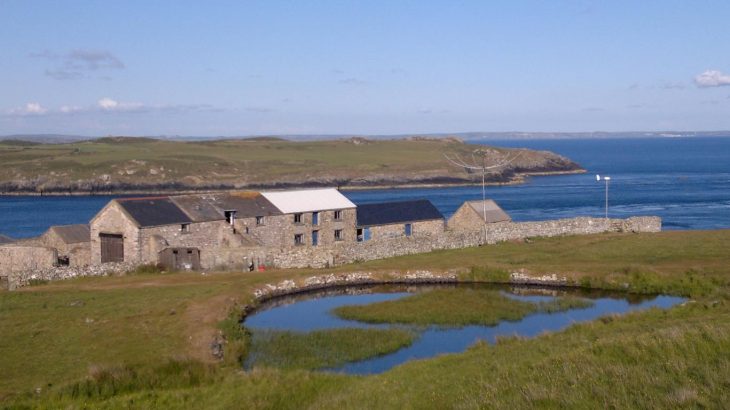 The Strumble Head team met at the Club House on Tuesday giving us time to test, prepare and pack the items needed for this year. As before, we always try to be more efficient and to take only the essential items to the island but also with consideration that we may have to stay longer than anticipated should the weather turn poor.
Sea and weather conditions were forecast to be very poor for the crossing on the Thursday morning but what a surprise to awake at 04:45 to see a beautiful morning on the Pembrokeshire Coast. The vehicles were loaded and we arrived at the Lifeboat Slipway around 07:30 where shortly afterwards the ‘Thousand Island Boat Charters’ arrived and we were on the Island by 08:00, amazing. (Click here for You Tube video of the boat crossing).

After heaving all the gear to the top of the ‘harbour’ we then had the massive climb to the top of the Island where we bunk in a Barn (complete with broody Chickens!). Carrying 2 x Acom 1000 Amplifiers, 2 x FT1000MPs and worst of all the Kenwood TL922 to the accommodation is always a huge challenge. Fortunately the RSPB Warden and his wife (Greg & Lisa) are very accommodating and helped us up the hill with the Quad and trailer for which we are always very grateful.

We got off to a good start and as always, no one sets their stations up until all antennas are fully up and we work together to achieve this. 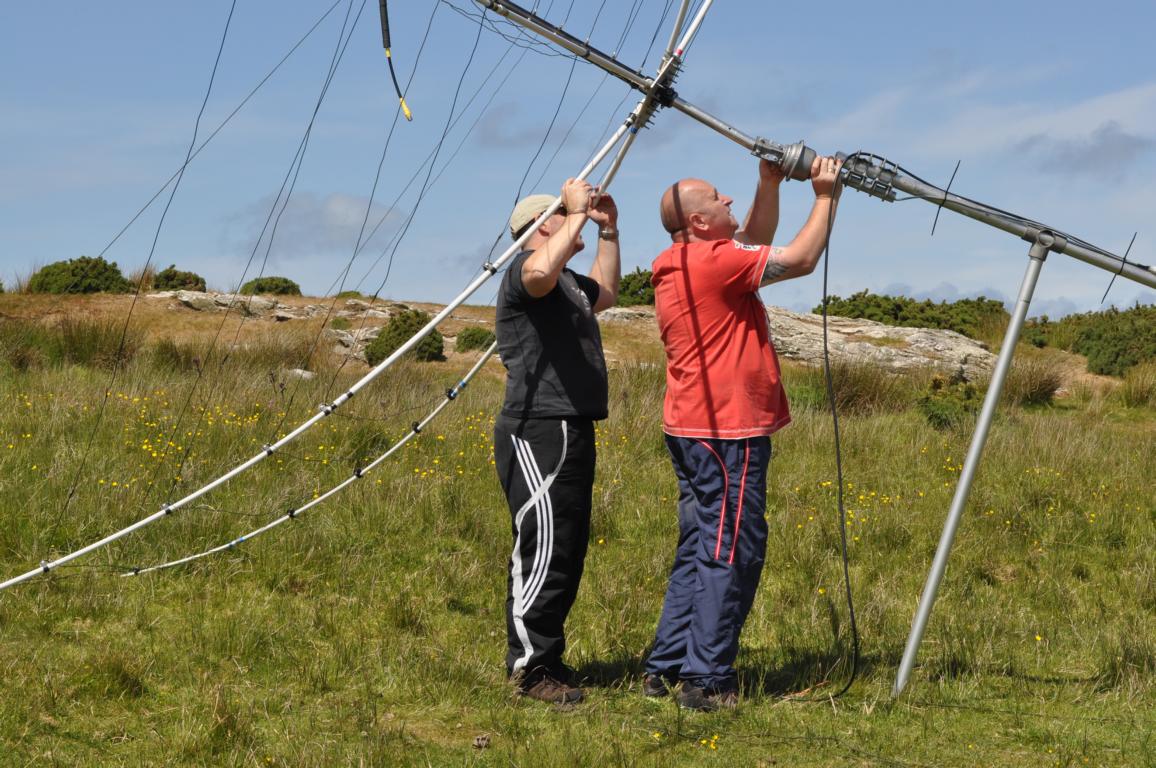 The 2 x G3TXQ Hexbeams (built by Ant MW0JZE) were the first up and then we worked on the Windom for 40 and 80M. Everything ran as a well oiled machine and shortly after lunch, all three antennas were up and we moved inside to set up the stations.

Around 15:30 local we had all three stations on air and were qrv from ‘IOTA EU-124 Ramsey Island’. Chris G1VDP started the Digi station on the Windom working 30M, Ant MW0JZE started up on 20 SSB and Tim M0URX worked 15m SSB. Pile ups were pretty fast, the World Flora Fauna reference helping to boost them as well 😉 .
Almost immediately the station used by Chris suffered a major problem when lights on the FT1000MP flashed and the dedicated PSU and TL922 also shutting down. 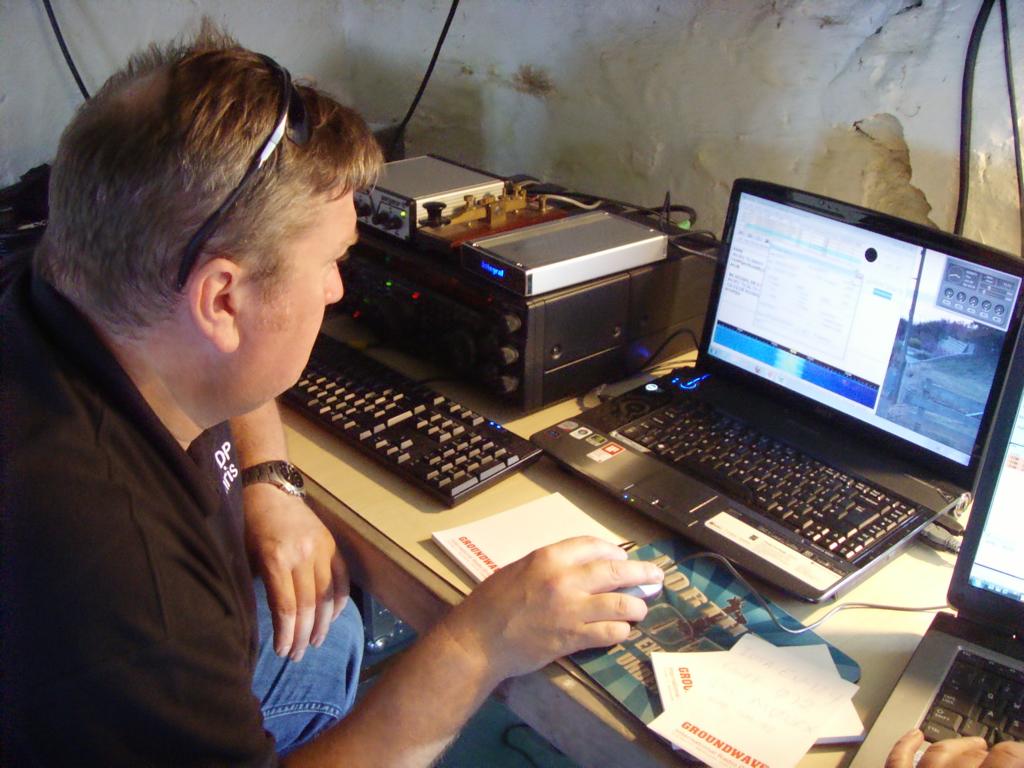 Then worse to come was that dreaded smell – something was on fire. A subsequent check showed a hole on a transistor within the PSU and sadly totally  n-repairable for here at least. We were now down to two stations.

We worked very well and most stations had solid pile ups until late in the evening. Conditions weren’t brilliant and most of the traffic was from EU with Yuri A65CA from Asia and a few stations from North America. Tim had a good run into SA and also the Caribbean but again, conditions definitely down. We had over  1000 in the log and with the two stations we were happy at that.

The next morning we all woke early after a terrible storm kept most of us awake during the night and we got started. We worked early on 40M SSB and then 20M SSB using both Acoms and running 300/400 watts. Rob MW0RLJ and Charles M0OXO decided to take a boat to the mainland to take the faulty equipment back and to collect a spare rig to replace it. The guys continued to work well and on their return the qso count was 2500. 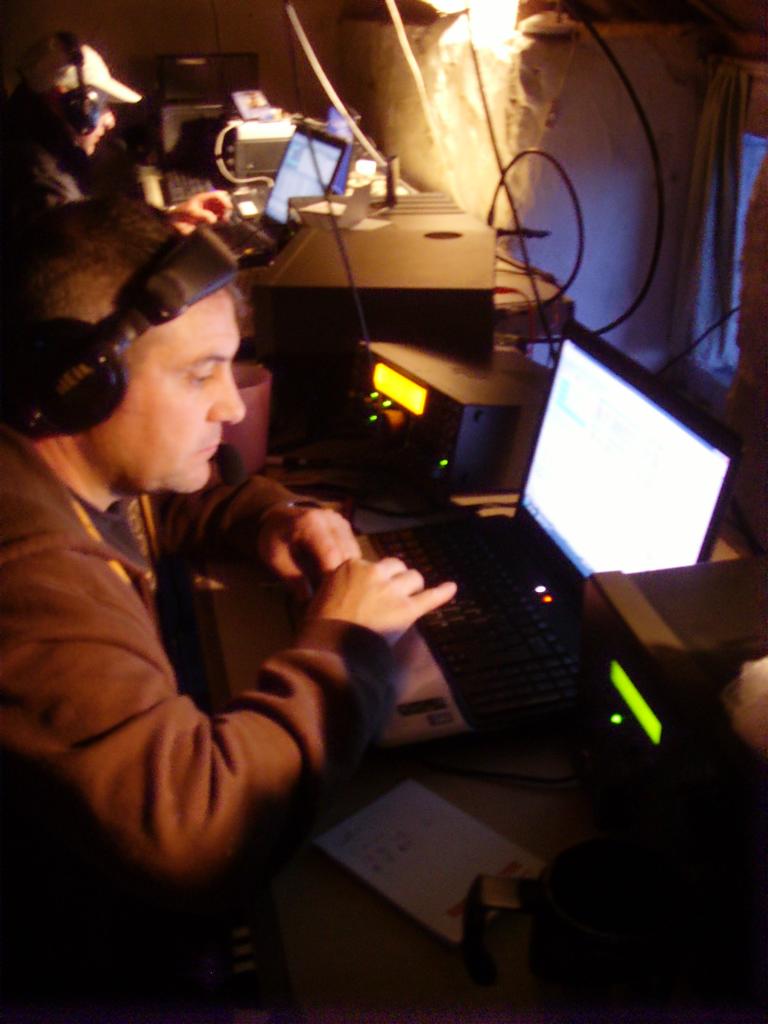 It became very obvious that conditions were giving us some Sporadic E propagation so they started pushing the higher bands (17, 12, 10 & 6) to give the Island IOTA to as many that required it. We had an amazing time, many stations commenting on how pleased they were to get EU-124 onto the new bands and in particular many ‘G’s that needed it as a new DXCC Band slot. Ant had been slogging away on 6M for a long time with a huge pile up and handed the Mic to Charles to continue. 6M continued to be very good and in total we finished with well over 396 qso’s & 29 Countries on one run on 6m, the better one maybe CN in Morrocco? Before we left we set ourselves  a target of 4000q’s for the whole trip and by midnight we closed on 4035 q’s, amazing and very pleased but that was to be short lived.

Charles got up the following morning (Day3) to find a problem. We had Voltage issues and it seemed the current was poor and not enough Ampage to run even the radio. We traced the problem to not  just one but both our generators had gone down, who would believe that? 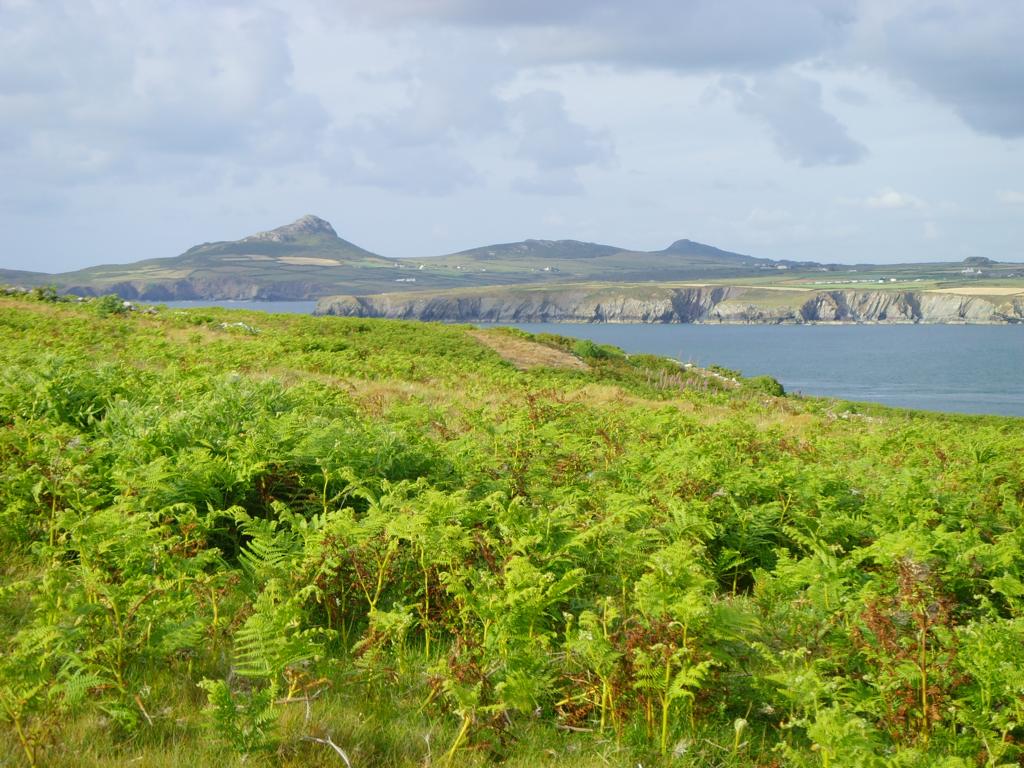 The black cloud descended over us and we spiralled into depression. We worked several theories for several hours and eventually decided to run the spare ‘Robin’ generator only and to run 100w only. We never gave up the fight and tried many theories were explored over a pot of Porridge (thanks Jane!) and we came up with a plan! Greg (RSPB Warden) kindly offered to allow us yet another Generator which could give us 6Kva so the mood lightened and again, we weighed up our options over a chat until 0930………

Time moved on and by 1130 we were on air again. Conditions were ok and by 1.00pm we were running well as we approached 1300 and the beginning of the World Flora Fauna’ GreenDay’ event, We used all bands from 40m thro 10m and as we were using 12 & 17m, we were not in a ‘contest’ but just an ‘event’! All continued OK with runs predominantly into EU but with the odd DX station thrown in the mix. When 1500 came the bands just died with barely a trace of anyone on 20 thro 10m. In a few hours this eased and we pushed on on 20m, 17 and 40M. 40M was running very well with Chris on the Mic running 100w from the FT890 but only 20 and 17 really had any decent propagation to EU. As the evening moved along we had another good run with many JA stations on 20M and a few down into OC with VK. We closed at 0030, filled the generator and after a few hours stargazing we slept………but not well! 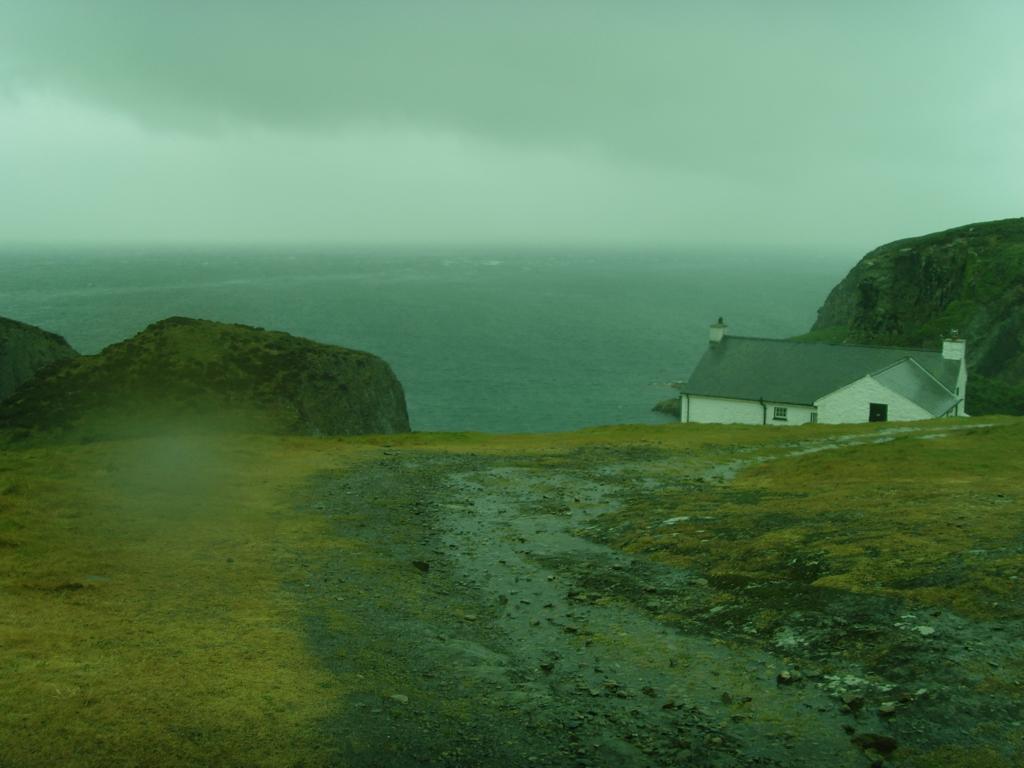 We were kept awake most of the night with the predicted ‘bad weather’. Sadly it was worse than expected. Torrential rain was hammering at the windows of the barn and roof and the wind was tremendous. First light at 0400 saw 2 x Hexbeams both leaning to the side and getting buffeted by the very strong wind. There was little we could do, they were unusable in that state so after a chat (again over a bowl of porridge) we decided they needed to be taken down to prevent damage. We all donned out wet weather gear and got stuck in. Taking them down took 15 minutes for each Hexbeam with us all working on the same antenna at the same time before moving on to the other. It initially appeared that the fault was either the rotators not being up to the strain of the wind or the strain on the stub mast and clamps were too weak. Another thought for another day but they were all down and we left the Windom in place. 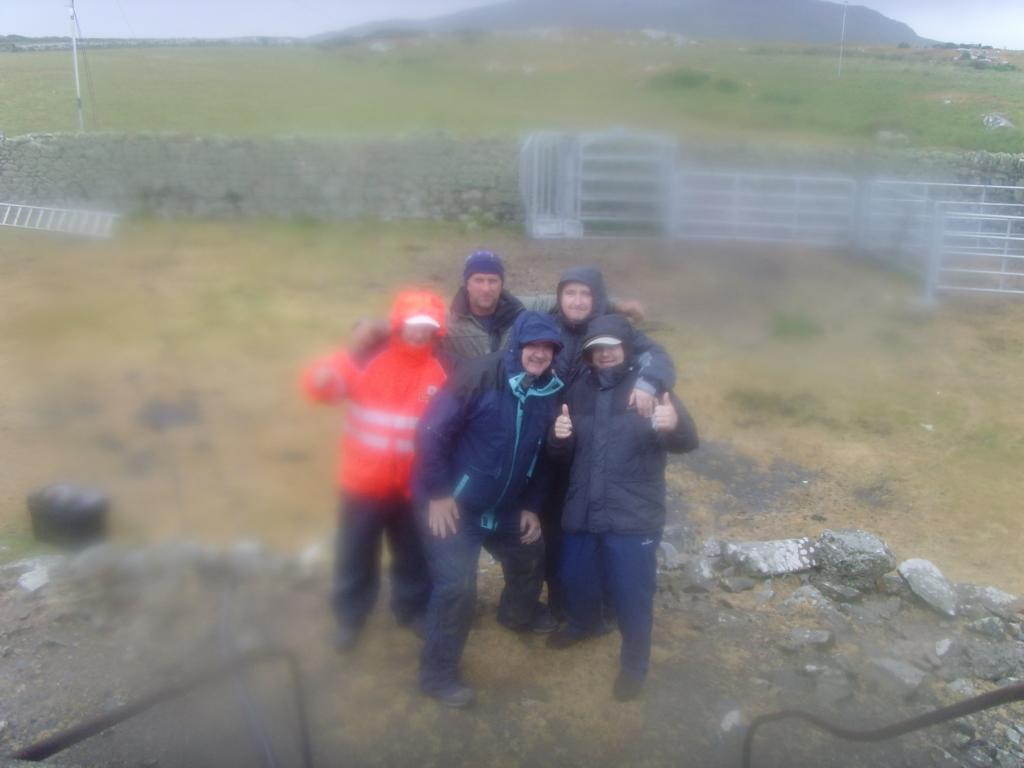 We spent the remainder of the morning inside the barn, we dismantled all the equipment and packed it away just leaving the Elekraft K3 and the Windom to use later in the afternoon with a view to making the few required qso’s which would give us 6000 contacts.

The afternoon was poor but we worked through trying our best but pretty soon we ran out of time. We had the now (now traditional) ‘Party’ looming with invited guests joining us for supper and a few drinks. By the time 7pm came we had 11 people for supper including Greg & Lisa, Nia,Mike & Nicola. We must not forget the now famous Border Collie ‘Dewi’, now a celebrity after his debut on the BBC’s ‘Countryfile’! After a lovely meal provided by Jane, we all had a few drinks (some more than others!) and spirits 😉 were high. Some of us were in a bit of a tacking by 0030, and with an empty bottle of Famous Grouse, one of Romiel and several bottles of red wine, we turned in for the night. At that point it seemed extremely unlikely that we would wake in 6 hours feeling well but Charles did and fired up the generator for a quick blast. Another 60 stations were logged on 40m which brought us to a final total of 6024 q’s and the end of the 2011 trip. 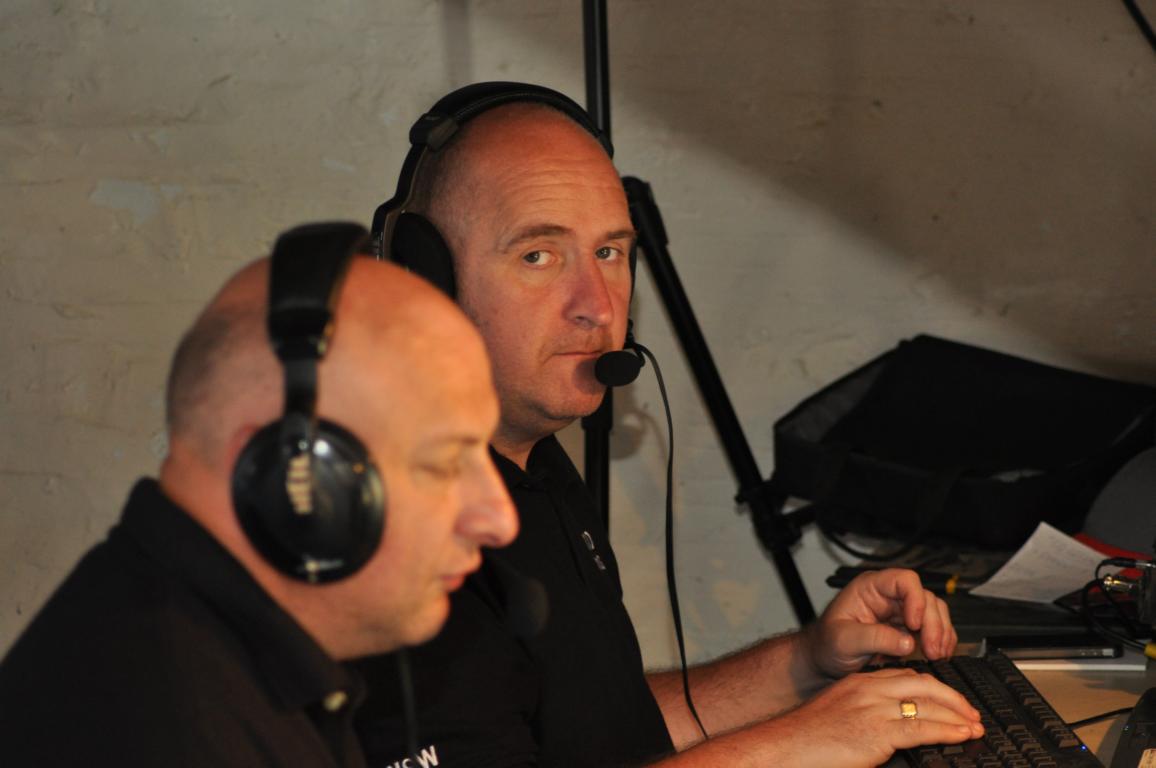 We got the gear down to the slip and from that point it took us 50 minutes to load the boat, do the crossing, unload at the Lifeboat Slip, carry the gear up to St. Justinians and to load the Van for the trip back to the farm.


It just leaves me with a few thoughts and thanks for the help we received this Year. Greg & Lisa Morgan (RSPB Wardens) were once again invaluable in help, planning, advice and in allowing us on the Island, two people who’s performance, committment and drive is outstanding and a major asset to the RSPB. ‘Thousand Island Expeditions’ once more gave their personal service to us and were extremely kind, a service recommended by us. Mike Chant and his crew aboard the ‘Gower Ranger’ also pulled out the stops with their prompt and personal service. Good luck to Nia Stephens (Assistant RSPB Warden) in her future career and not forgetting Mike and Nicola who give their time as RSPB volunteers. Finally a big thanks to all of you that worked us whilst on Ramsey Island. We were very pleased to give so many of you the new Band Slots, IOTA and WFF areas. I guess almost all stations on 6 meters would have been very pleased to get IO71hu in their logs so a good job all round. Some stations worked us on 7 band slots and many more with 6 contacts which was remarkable. Of course we wouldn’t be without the odd negative comments either. Some made good points and others were well, just pathetic but all in all, a great trip to Ramsey in 2011.

Thanks to everyone from the Strumblehead DX Group; Rob MW0RLJ, Charles M0OXO, Tim M0URX, Chris G1VDP, Ant MW0JZE and of course Jane (our Support Staff 😉 ) who kept us fed with over 120 meals, doing this with 2 small gas rings on a Baby Belling stove and little facilities was a great & welcomed achievement!

**One thing we did learn was that ”two Acoms are better than one”….(well to fry breakfast on at least!!!) 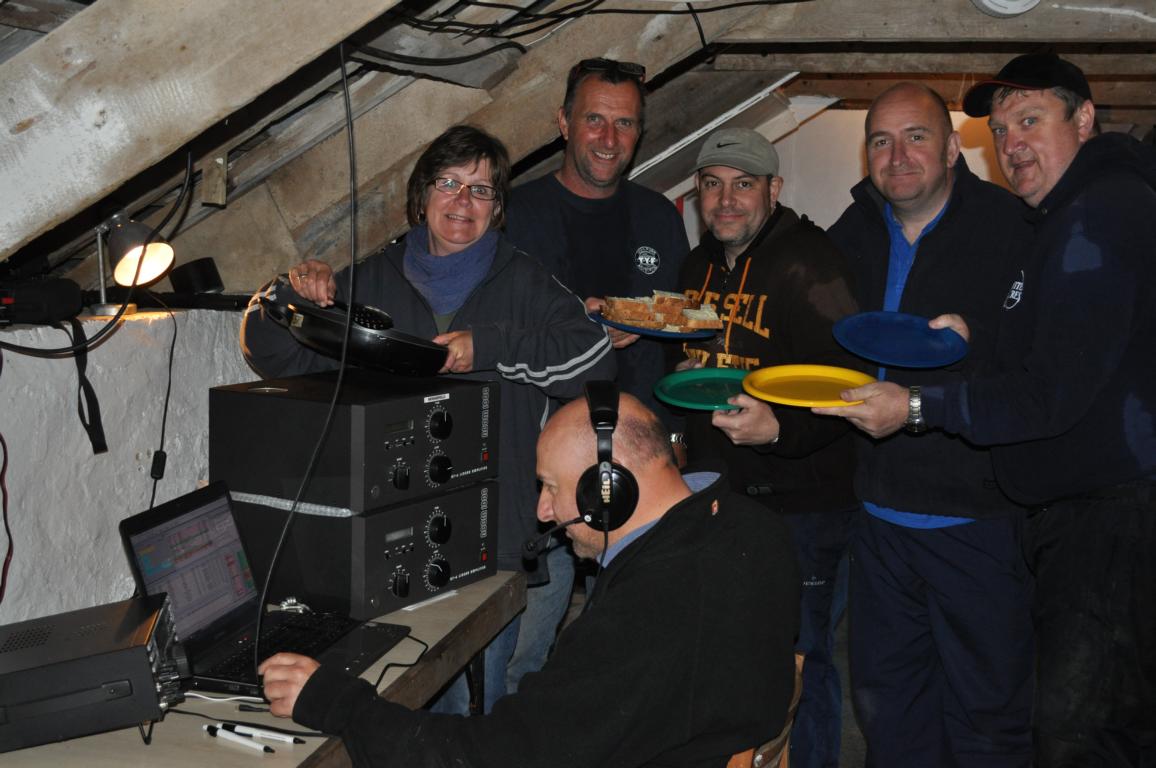