Sunday, July 4, 2021 2200UTC
Members of the Russian Robinson Club, operating as KL7RRC from Alaska’s Adak Island (NA-039) are sad to report that due to circumstances beyond their control, they will be cutting short this IOTA activation originally set to occur on both Adak and Kiska Island (NA-070).
You may recall that original plans were for the five member team to fly into Adak and be met by a chartered sailboat. Two weeks ago, SV Seal was one day from Dutch Harbor to pick up the team’s gear when an unfortunate medical emergency forced it to return and cancel the charger.
Tim NL8F, who lives in Dutch Harbor, AK was able to locate a suitable replacement vessel to take the team out the 240 miles to Kiska with the “new” vessel picking them up in Adak and transferring them to Kiska on July 6 or 7.
The team agreed to continue with the project and flew to Adak on Wednesday, June 30. For the past five days they have set up their stations and antennas and currently QRV with three stations.
However it was learned earlier today that a mechanical failure on this new vessel has forced it to cancel as well. Today, efforts were made in Adak trying once again to locate a suitable vessel. After exploring all possibilities and in consideration of safety factors involved with sailing out into some of the most difficult waters of the Bering Sea, it was collectively decided to not further pursue last-minute options. The team is obviously disappointed in this outcome but feel the decision being made is in the best interest of safety. They have also agreed to pursue another attempt to get to Kiska next year.
Meanwhile, KL7RRC will continue to operate from Adak until Friday, July 9 in hopes that everyone still needing NA-039 will find a way into the log.
Conditions from Adak have been good and their log shows over 5,200 QSO‘s following four days operation. But the real surprise has been conditions on 6 m. Yesterday (July 3-4 UTC), KL7RRC experienced a great 6m opening that resulted in 468 JA QSOs. A few stations were also worked from BY, DU and HL. They will continue to place emphasis on 6m during their remaining time on Adak.
Team leader Yuri N3QQ has indicated that due to the fact this IOTA Expedition emphasized the Kiska portion of the project, anyone who donated to the project wanting a refund, should contact him directly
QSL information can be found on the RRC website: https://na-234.com 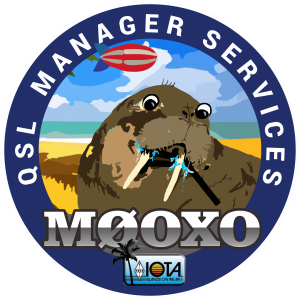 M0OXO QSL Bureau Mailing (05/07/2021)
QSL cards have been posted to 85 World Bureaus – Monday 5th July 2021.
This mailing is a joint mailing between M0OXO Charles & M0URX Tim. (Thanks Chris G1VDP)
I would very much appreciate feedback from you when the QSL cards start arriving at World Bureaus or received by hams around the world?
This mailing had been delayed due to Covid-19 restrictions. The cost of air freight for this mailing is considerably higher due to the lack of air freight capacity at this time.
The parcels are sent by Priority Business Mail to get to the Bureaus quickly. Here’s the breakdown;
Total amount of QSL cards dispatched: 23,804
Via M0URX 9,139, Via M0OXO 14,050, Via MD0CCE 615,
Total Weight: 88.328 kgs  £645.93 – £7.31 per kg. (gross weight includes packaging)
Total Shipping Cost £645.93 – £7.31 per kg.
Average postage cost 2.71p per QSL card.
If possible please consider a donation towards out bureau ailing costs. We are trying to keep this service running despite the huge hike in Freight Costs post the Covid Pandemic – Thank you .