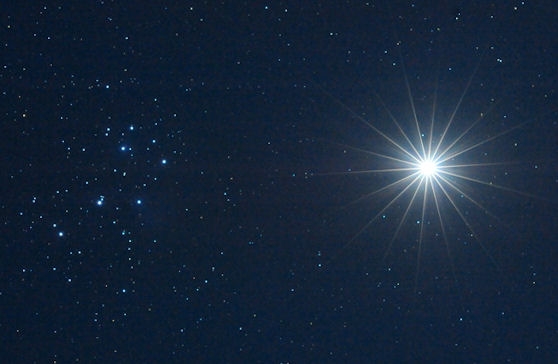 Watch out Seven Sisters, Venus is coming !!
This week the second planet from the sun will pass directly in front of the Pleiades star cluster. It’s a rare sunset conjunction that’s easy to find with the unaided eye, but best seen through binoculars or a small telescope.


The action begins on Monday evening, 2nd April, when Venus enters the outskirts of the little dipper-shaped asterism. Look west at sunset for Venus–it’s the brightest thing around–then scan the area using binoculars. The conjunction will be immediately clear. The best evening to look is tonight Tuesday, 3rd April, when the brilliant planet glides just south of the dipper’s bowl. Venus exits by the handle on Wednesday, 4th April.  Venus passes through the Pleiades in this way about once every 8 years.

The Pleiades, also known as the “Seven Sisters,” are a cluster of young stars. They formed barely 100 million years ago during the age of dinosaurs on Earth from a collapsing cloud of interstellar gas. The biggest and brightest members are blue-white and about five times wider than our own sun.

Because of their distance, about 400 light years away, the Pleiades are near the limit of naked-eye visibility. When Venus joins them in conjunction, it will look like a supernova has gone off inside the cluster. Venus’s thick clouds reflect so much sunlight, the planet outshines every thing in the night sky except the Moon. Strangely, though, the Pleiades do not look puny in comparison, just delicately beautiful.

Look west just after sunset, and see for yourself.

Is it Snowing Microbes on Enceladus? 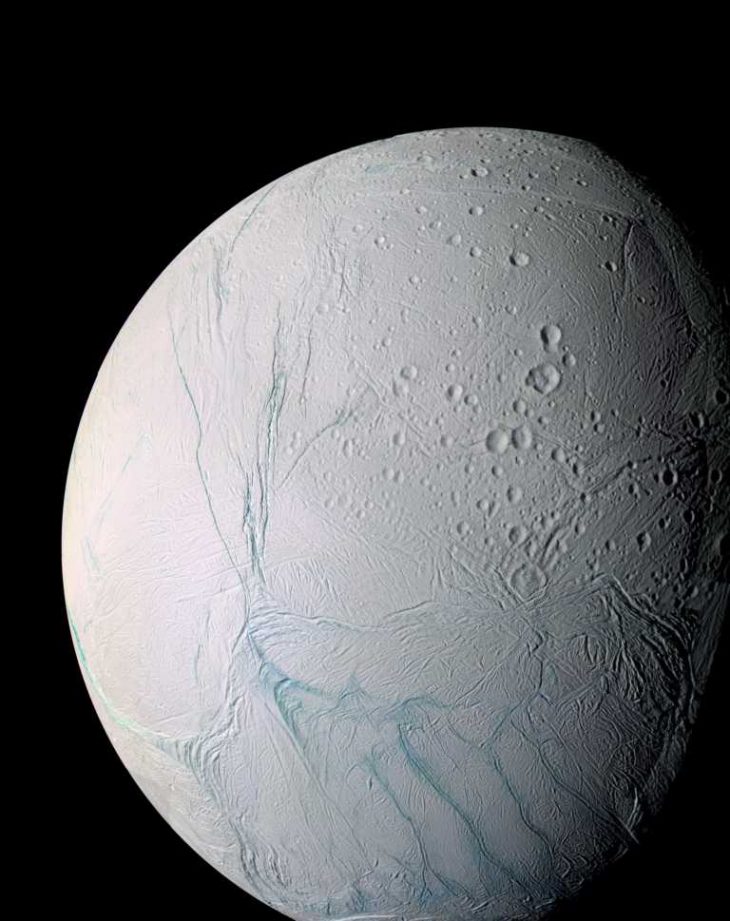 In a series of tantalizingly close flybys to one of Saturn‘s Moons, named “Enceladus,” NASA’s Cassini spacecraft has revealed watery jets erupting from what may be a vast underground sea.

These jets, which spew through cracks in the moon’s icy shell, could lead back to a habitable zone that is uniquely accessible in all the solar system. Photo below shows dramatic plumes, both large and small, spraying water ice from many locations near the south pole of Saturn’s moon Enceladus. More than 30 individual jets of different sizes can be seen in this image captured during a flyby of NASA’s Cassini spacecraft.

Thermal measurements of Enceladus’s fissures have revealed temperatures as high as -120 deg Fahrenheit (190 Kelvin). That adds all the heat up to 16 gigawatts of thermal energy that are coming out of those cracks. Now that the orbit’s eccentricity has lessened, the heat emanating from the interior is a combination of heat produced today and in the past.  But since more heat is coming out presently than is being produced, Enceladus is in a cooling off stage and the liquid water is returning to ice.